Winner of the online voting competition are “People’s Champs” for the week AND helps their overall ranking! There is no award for second place but all votes that come in add to the tag team’s final ranking so vote away! 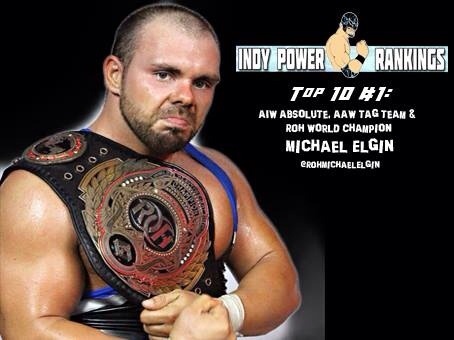 1. Michael Elgin (@ROHMichaelElgin)-This was a week of chaos for the voters, but when it was all said and done, the “Unbreakable” Triple Champion consistently had the most votes among the official voters to secure yet another #1 ranking this year. While he didn’t get #1 last week after winning the ROH World Title, he bullied his way to the top this week by teaming with BJ Whitmer to defeat The Hooligans at IWA Mid-South on 6/28 and then he surprised a lot of people by defeating Tim Donst to retain the AIW Absolute Title on 6/29. Look out because he’s inching ever closer to the #1 spot in the 2014 IPR 100…a spot he owned last year. #9 in the online poll.

2. Rhett Giddins (@bmop_rhett)-5 wins. 1 night. What more can you ask from someone? Granted he didn’t get a lot of support in the fan poll, but the official voters saw the SCW Florida Heavyweight Champion’s success rate on 6/25 and cast a lot of votes his way. His record at BELIEVE 74 was 5-0-1, even finding a way to win the Battle Royal in the same day. Very few people have ever had this much success in just one day. Congrats to him on his highest ranking to date.

3. Matt Tremont (@TremontCZW)-While he did lose to Viper at IWA East-Coast on 6/24, it was the fortitude he showed in battling through an injury to win IWA’s 2014 King of the Death Matches that really made an impression on the official voters. He appeared to injure himself in the first round vs. Jesse Amato in a blood bath, but then battled through to the semi-finals where he defeated John Wayne Murdoch and Ron Mathis in an Elimination 3 Way, before finding a way to survive the onslaught of Josh Crane in the Finals. Bloodied and battered, Tremont took the tournament and the #3 spot this week. #10 in the online poll.

4. JT Dunn (@TheJuiceee)-JT Dunn and David Starr were a dilemma for the official voters this week. They were #1 and #2 last week, so how could they drop after winning yet another title at NYWC when they won their tag team titles? It was difficult to determine, but most official voters dropped them just a little bit in their ballot due to lack of singles activity. Further proof that this can never be an exact science, but hey, both members did remain in the Top 10 this week, regardless. Obviously they’re still OVER.

5. BJ Whitmer (@bj_whitmer)-The IWA East-Coast Heavyweight Champion made a solid defense on 6/24 as he defeated Rockstar Pro Champion Aaron Williams to retain the title. He didn’t stop there. He then went to IWA Mid-South on 6/28 where he teamed with Michael Elgin to defeat The Hooligans in a hard-fought battle. On 6/29 he wrapped up the weekend with a bang by tagging with Jimmy Jacobs to win the AIW Tag Team Titles from long-reigning champions, The Jollyville Fuck-Its. Fantastic week for “Mr. IWA”.

6. Ricochet (@KingRicochet)-“The King” returns to The Top 10 with yet another sweep of Dragon Gate in Japan. The DGUSA Open the Freedom Gate Champion and 2014 NJPW Best of the Super Juniors picked up 3 solid tag team wins (in various different match types) to go 3-0 on the weekend. While he didn’t have any singles matches over the weekend, the official voters felt his overall prestige and quality of opponents was enough to carry him to a Top 10 ranking this week. Some voters had him even higher than the spot he ended up. Ricochet has inarguably been a fixture in the Top 10 throughout 2014. With Michael Elgin coming on strong lately, can he hang onto the top spot in this year’s IPR 100?

7. David Starr (@TheProductDS)-It’s kind of baffling that JT Dunn is 3 spots higher than his tag team partner who has won 14 straight matches, holds 4 titles, and did the exact same thing as Dunn over the weekend, but sometimes that’s just how the votes shake out. The XWA Heavyweight, FIP Tag Team, CZW Tag Team, and new NYWC Tag Team Champion continues to hang around The Top 10 and make people “look at it” as whether it’s in tag team action or in singles, he has been absolutely unstoppable as of late.

8. Kongo Kong (@RealKongoKong)-“The Baddest Man Alive.” “The Most Believable Big Man in Pro Wreestling.” The official voters were loaded with quotes this week after the big man nailed a suicide dive, a moonsault, and a big splash from the top rope to defeat Hy-Zaya for the IWA Mid-South World Title in the finals of their title tournament on 6/29. He obviously impressed the voters on the fan poll as well as he finished in 2nd with 63 votes.

9. Randi West (@RanWestWrestlin)-While it’s her first weekend being ranked, it’s kind of a weekend of “what could have been” for the 2014 Queen of the Death Matches. While it was an amazing accomplishment to win IWA Mid-South’s 2014 QOTDM (knocking off Mistress Burgandi, Thunderkitty, and Ludark Shaitan in the process) it was her loss the next day in a 6 Woman Tag Team Match that ultimately may have cost her the #1 spot this week. Losses hurt, but that aside, Randi West proved her worth with a gruelling, gritty performance to take home the crown.

10. Crazy Mary Dobson (@CrazyMaryDobson)-Amazingly, this is the first time being ranked for this international superstar on the rise. It was an impressive week for “Crazy Mary” as she teamed with Madman Pondo to defeat Heidi Lovelace & Ron Mathis at IWA East Coast on 6/24 and then defeated Samantha Heights at D1W on 6/25. She finally beat Amber O’Neal by DQ at SHINE 20 on 6/27 to end the week with yet another win. 3-0 gets her in this week.

People’s Champion. Noam Dar-128 votes, 3 wins to capture the PROGRESS Wrestling World Cup, and this week’s People’s Champ award. He basically went wire to wire in the poll as he led from almost start to finish. The UK came strong again this week.

Winner of the online voting competition is “People’s Champ” for the week AND helps his/her overall ranking! There is no award for second place but all votes that come in add to the wrestler’s final ranking so vote away!

Thanks to Robert Truesdale for tweeting results. Follow him @RasslinRedbeard

Eric Bradford issued an open challenge which was accepted by “The Salem Sinner” Sixx who defeated Bradford, as a result Bradford is gone from WrestleForce.

‘The Southern Savior’ John Skyler def Michael Frehley. “The Juggernaut” Jon Malus returned after the match to help Frehley and was attacked by Skyler.

‘The Fabulous Playboy’ Bob Keller def BJ Hancock in a brutal “I Quit” match that went all over the building.

Sick Boy & Lodi def Caleb Konley & Hexx. After the match Konley & Hexx came to blows and Hexx resigned his position as Konley’s “hired muscle” by hitting a power bomb on his former boss.

Thanks to David Garrison for results

Stryknyn challenged Anarchy heavyweight champion to a title match which was accepted for the July 12th show.

Iceberg vs Mikael Judas was ruled a no contest when Jeff G. Bailey’s group The Elite ran out to intefere.

Thanks to Jeff Melton for results