It’s the end of the year/start of a new one so it’s that time again! Below is the 2015 IPR 100 which for those of you who are unfamiliar, is a collection of 100 independent wrestlers based on their previous rankings throughout the year to date. Their rankings in the IPR 100 are 100% based on where they have been ranked in the Indy Power Rankings this year with a year-end vote among the official voters to break any ties. This is not our opinion of who the best wrestlers (or “workers”) in the world are based on who we think had the best matches, nor is it a list of names we sat down and collected at the end of the year. Rather, this is a mathematical compilation of how well these talents have done this year based on their rankings throughout the year and the 3 major criteria that we use to rank wrestlers on a weekly basis:

1. Win-loss record for the week & overall
2. Strength of opponents for the week
3. Overall public perception of the wrestler in question (i.e. Chris Hero has a stronger following than a regional independent wrestler who most people have never heard of)

The Tag Team Top 5 is a separate list (Tag Team Top 50) so look for that to come out shortly. In 2015, we ranked/mentioned 1208 wrestlers in singles (up from last year’s total of 644 likely due to the addition of more international talent and the removal of ROH & New Japan shows). Out of those 1208 wrestlers, this list of 100 were the cream of the crop as far as how good their year was in terms of the 3 criteria we rank independent wrestlers based on. With that being said, here’s the 2015 IPR 100: 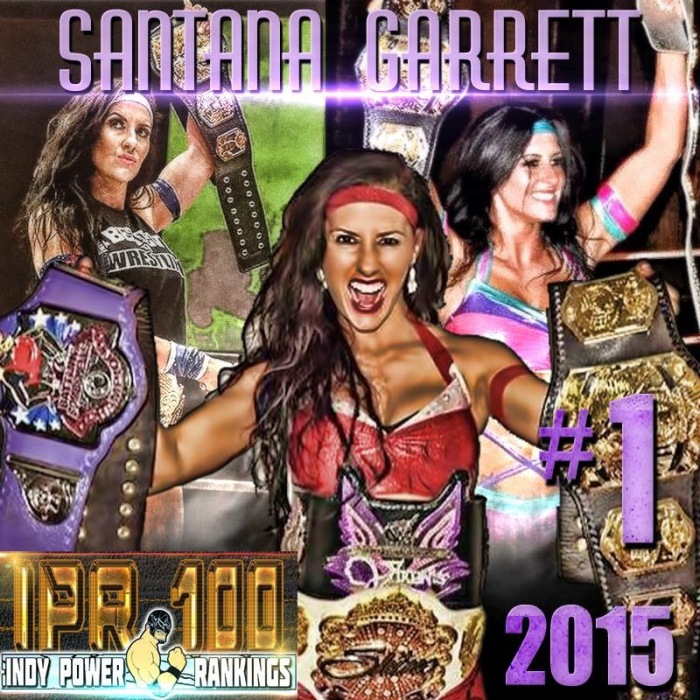 1. Santana Garrett-In the 3 year history of the IPR 100, very few people (if anyone) have had as good of a year as Santana Garrett did in 2015. While it was close at the mid-year update, she blew away the competition in the second half of the year. In 2015 she collected four #1 rankings, five #2 rankings, two #3 rankings, four #4 rankings, two #5 rankings, one #8 ranking, three #9 rankings, two #10 rankings, and FOURTEEN mentions without being ranked. That is absolute dominance. To justify these rankings at a glance, look at the titles she collected and/or defended in 2015: SHINE Title, NWA World Women’s Title, CWE Vixen’s Title, NPW Women’s Title, OPW Women’s Title, Battling Bombshells Title, and Wonder of Stardom Title. That may not even be her whole collection either. In 2014 we debated whether women should be ranked separately for the men because they weren’t getting the credit they deserved. We have put that argument to rest as Santana Garrett OWNED 2015.

2. Akira Tozawa-Santana Garrett’s biggest competition in 2015 was from someone who she has never competed with or against…which is a shame, because we’d love to see it. Tozawa MOSTLY competed in Dragon Gate throughout 2015 which probably held him back just a bit, but in the end, a #2 ranking for the year is still simply amazing. Let’s not forget that he did completely crush most of his competition in Dragon Gate as he racked up four #1 rankings, two #2 rankings, one #3 ranking, three #4 rankings, two #6 rankings, one #7 ranking, one #8 ranking, two #9 rankings, and eight mentions without being ranked. In 2015 he won THREE different titles at Dragon Gate as he won the Dragon Gate Open the Brave Gate Title, the Dragon Gate Open the Owarai Gate Title, and the Dragon Gate Open the Triangle Gate Titles which he still holds. 2016 could be another great year for Tozawa, but it will be very difficult to surpass his 2016 as the voters have really gotten a little more strict about victories in tags and how they reflect in singles, etc…

3. Drew Galloway-After being ranked #14 in the 2014 IPR 100, no one really knew what to expect from Galloway in 2015. He surpassed his 2014 as he had a FANTASTIC year. The only things that slowed him down at times were his forays into TNA and GFW which are not eligible for our rankings. He had more #1 rankings in 2015 than anyone as he collected SIX of them, which is tied for second most all time (with Michael Elgin last year). He also had one #2 ranking, one #3 ranking, two #5 rankings, one #6 ranking, one #7 ranking, one #9 ranking, and six mentions without being ranked. He wasn’t far behind Tozawa for the #2 spot and if you look at his title collection in 2015, you’ll see why. In 2015 he won and/or defended: The Scottish Heavyweight Title, the ICW World Heavyweight Title, the DPW Heavyweight Title, the European Heavyweight Title, the OCW Heavyweight Title, and the DGUSA Open The Freedom Gate Title/EVOLVE Title. If he spends the majority of his time on the indies in 2016, his year could be just as good without question.

4. Kongo Kong-It was another PHENOMENAL year for Da Monsta as he found a way to successfully split his time between GFW and the indies. He does fall one spot from last year’s #3 ranking, but if you average it out, no one had a better two-year run than Kong. Kongo Kong started off 2015 VERY strong, then went a bit quiet in the summer, and then bounced back HUGE at the end of the year. In 2015 he took home two #1 rankings, one #2 ranking, two #3 rankings, two #4 rankings, one #10 ranking, and THIRTEEN mentions without being ranked. He collected and defended several titles in 2015, most notably the JCW Heavyweight Title, the IWA Mid-South World Title (lost it in May and then won it back in December), and the FWF Heavyweight Title. He also won the 2015 Ted Petty Invitational Tournament proving once again that the last couple of years have been his for the taking. Promoters would be wise to book the best big man in professional wrestling in 2016.

5. Matt Tremont-We can argue and debate over who is the best Death Match “worker” in the world right now. What can’t be debated is the fact that “The Bulldozer” had THE best 2015 in terms of our rankings. He bulldozed his way to three #1 rankings, one #2 ranking, one #3 ranking, one #4 ranking, one #6 ranking, and ten mentions without being ranked. Not only did he win the IWA Mid-South King of the Death Matches for the second straight year, he also won CZW’s Tournament of Death for the very first time. Don’t forget that he also won and defended the CZW World Title, the VOW Hyper Sonic Title, and the VOW Anarchy Title in 2015, showing just how versatile he can really be. One of the best talkers in the business could be a great addition to any promotion in 2016. Let’s see him in Reseda. Book it, PWG!

6. Jimmy Havoc-With the inclusion of all international talent (excluding shows that ROH and New Japan ran of course) we got a lot of great new talent to the IPR 100 this year. The UK was well-represented and the highest ranking from the UK goes to Jimmy Havoc. He had an incredible 2016 without even getting a #1 ranking at any point. He did however manage to get his hands on one #2 ranking, three #3 rankings, one #5 ranking, one #7 ranking, one #10 ranking, and eight mentions without getting ranked. Havoc was a true title collector in 2015 as he won or defended the PROGRESS Title, the SWE Tag Team Titles, the All England Title, the FPW Title, the SWE Speed King Title, and the IPW: UK World Title. #6 could just be the tip of the iceberg for Havoc in 2016, but we have to make our plea to North American promoters…let’s see what he can do outside of Europe in 2016!

7. Will Ospreay-The UK’s second highest ranked competitor did venture into the U.S. on two occasions for PWG and looked great in doing so. 2015 wasn’t so much a year to collect titles for Ospreay as it was to just simply win big matches, but he did win or defend the FPW Tag Team Titles, the SWE Speed King Title, the RPW British Cruiserweight Title, and the PROGRESS Title. He also won the Super Strong Style 16 Tournament while getting to the Finals of the UK Super 8 2015, the Speed King 2015, and the NWA British Title Tournament. We expect to see a lot more of him in 2016, especially if he can continue to venture out to PWG where all eyes are always on their shows adding to the prestige of any wins there.

8. “Bad Bones” John Klinger-Bad Bones was ranked #33 last year and topped that ranking in 2015 as he shot into the Top 10 this year. Much like Jimmy Havoc, he never got to the top spot in the Indy Power Rankings in 2015, but he did muscle his way to two #2 rankings, one #5 ranking, one #6 ranking, one #7 ranking, one #9 ranking, and eight mentions without being ranked. John Klinger calls himself “Best in Europe” and it was hard to argue with that monicker this year. He got to the Finals of the Mitteldeutschland Cup 2015 and also won or defended the SWE King of Switzerland Title, the wxw Unified World Wrestling Title, the IPW: UK World Title, and the wXw Shotgun Title. Much like many of the other Europeans, we really want to see him in the U.S. in 2016!

9. Johnny Gargano-“The Whole Shebang” has been the model of consistency since the IPR 100 began in 2013. He ranked #3 in 2013, #13 in 2014, and now #9 in 2015 proving that despite his ventures into NXT, he’s showing no signs of slowing down on the indies right now. He failed to obtain a #1 ranking in 2015, but he did get one #2 ranking, one #4 ranking, two #5 rankings, two #7 rankings, and five mentions without being ranked. He held the DGUSA Open the Freedom Gate Title until March of 2015, won the DGUSA Open the Freedom Gate Title in April before losing it in May, and held the Smash Wrestling Title from 4/26/15 to present. It will be interesting to see where his career path leads in 2016 and we can’t wait to see it.

10. Kimber Lee-One of the tiebreakers the official voters had to vote on at the end of the year was a tie for the #10 spot between Kimber Lee and Ultimo Dragon. While Ultimo Dragon certainly had a great year in Japan, the official voters ALL felt that Kimber Lee had a much more notable year and deserved the #10 spot. Look at her body of work in 2015 for proof as she had two #1 rankings (the second highest of any female behind Santana Garrett), two #6 rankings, one #8 ranking, and six mentions without being ranked. Her success came in both singles and tags as she won and defended the SHINE Tag Team Titles and the SHIMMER Tag Team Titles with Cherry Bomb. She also won and defended the WSU Tag Team Titles with Annie Social. In singles she won and/or defended the MCW Women’s Title, The Legacy Wrestling Women’s Title, and the big one…The CHIKARA Grand Championship. Her year was incredible and there’s no reason she can’t become the second female to be ranked #1 in the IPR 100 in 2016.

Just BARELY missing out (they were mentioned as IN on the podcast, in error):
Yuji Okabayashi
Jon Ryan
As we did last year, we announced the 2015 IPR 100 LIVE on Weekly Wrestling Podcast. This year, we announced the Tag Team Top 50 LIVE on Talkshoe (with a replay on Elite Podcast Network) with HUGE guests coming on to get their rankings and talk about their 2015 & 2016 coming up. Rather than have us explain every ranking to you, it’s best to listen to the shows!
Guests on the shows:
12/29 (Tag Team Top 50 Day 1)-Grits and Gravy (Jon Murray & Bruce Grey) and Flawless and Lawless (Rex Lawless & Blake Morris)

Here is the Tag Team Top 50 link which has both days:
http://www.talkshoe.com/talkshoe/web/talkCast.jsp?masterId=140077&cmd=tc

Big shout out to Lucha Loot who helped sponsor all of the big shows.
Our Website (where YOU can participate in the weekly online poll voting): https://indypowerrankingsipr.wordpress.com/
Our Facebook page: http://www.Facebook.com/IndyPowerRankings
Also search “Indy Power Rankings” for our open Facebook group where anyone on the indies can promote their various merchandise, fan pages, and upcoming events
Our Twitter: @IndyPowerRankin
Our Instagram: @IndyPowerRankings