#1 Rey Fenix & Penta El Zero M-They had one win together and simply put, it was the biggest win of the entire weekend of wrestling. The team of Fenix & Penta El Zero M scored an absolutely HUGE win as they defeated The Young Bucks and Ricochet & Matt Sydal in a Triple Threat Match to win the PWG World Tag Team Titles on 3/18. There was little debate as to who would be #1 this week after they dethroned The Bucks from their 631 Day reign as champions. Penta El Zero M had come oh so close to getting #1 in previous ventures into the Indy Power Rankings, but this week he finally busts through with a #1 ranking in the Tag Team Top 5. If they can continue this team on a consistent basis, there’s no reason they can’t make a strong push in this year’s Tag Team Top 50.

#2 Speed of Sounds (Tsutomu Oosugi & Hercules Senga aka Yapper Man #1 & #2)-Despite going 5-0, Speed of Sounds did NOT get the #1 ranking this week. Much of that is because they were teaming with other talents in what many would describe as matches that really had no importance in the grand scheme of things. No titles on the line. No tournaments. That’s essentially the best excuse as to why they’re not #1 this week. They teamed with Takumi Tsukamoto at Big Japan on 3/13 to defeat Kazuki Hashimoto, Takuya Nomura and Yuya Aoki, then defeated The Brahman Brothers on 3/14, then defeated Kazuki Hashimoto and Tatsuhiko Yoshino on 3/15, then (as Yapper Man #1 & #2) defeated Takeshi Minamino and Ken 45°at Michinoku Pro on 3/18, and then teamed with Daichi Sasaki at Michinoku Pro to defeat Fujita Hayato, Ken 45° and Kengo to finish off their perfect week.

#4 Ugly Ducklings (Rob Killjoy & Lance Lude @3MotherDuckers)-The Rockstar Pro, PWX, and 2/3’s of the PWF Universal Six Man Tag Team Champions get ranked yet again this year after they defeated The Foundation (Bruce Grey & Sid Fabulous) in a non-title match at Rockstar Pro on 3/15, then teamed with Zane Wolf on 3/17 to defeat The Chosen Few at Chair City Clash, then defeated Chet Sterling & Smith Garrett in the semifinals at the Ivan Koloff memorial tag tournament, and then lost to the Mid-Atlantic Outlaws the same day to go 3-1 for the week. 2016 was amazing for the Ducks. 2017 looks to be even better so far as these ducks continue to fly together.

#5 The Monroes aka Black Wrestlers Matter (Malcolm Monroe II aka DBA & Malcolm Monroe II)-The XICW and NEW International Bigtime Wrestling Tag Team Champions return to the rankings this week after they defeated Spirit Squad (Kenny & Mikey) at XICW on 3/18 to retain the titles and then defeated Lewis Lambda & Lil’ Eddie to win the vacant International Bigtime Wrestling titles on 3/19 to go 2-0 for the week. It was a good weekend for The Monroes as they’re taking steps towards establishing their names outside of just the Michigan-area. Keep an eye on them as 2017 rolls on.

People’s Champs. Re-Genesis (Tony Storm & Mason Price)-This tag team became the NEW NWA Deep South Tag Team Champions as they defeated The Punkadelics at NWA Southeastern Wrestling on 3/18 to win the titles. That win got them on the poll and they absolutely dominated the online voting competition as they collected 99 votes to win their first People’s Champs award. You can give a like to Mason Price’s Facebook Page here: https://www.facebook.com/Mason-Price-784992891645569/ and you can book him at mason.price11@yahoo.com . You can like Tony Storm’s Facebook here: https://www.facebook.com/TonyStorm85 and you can book him at TonyStorm85@hotmail.com 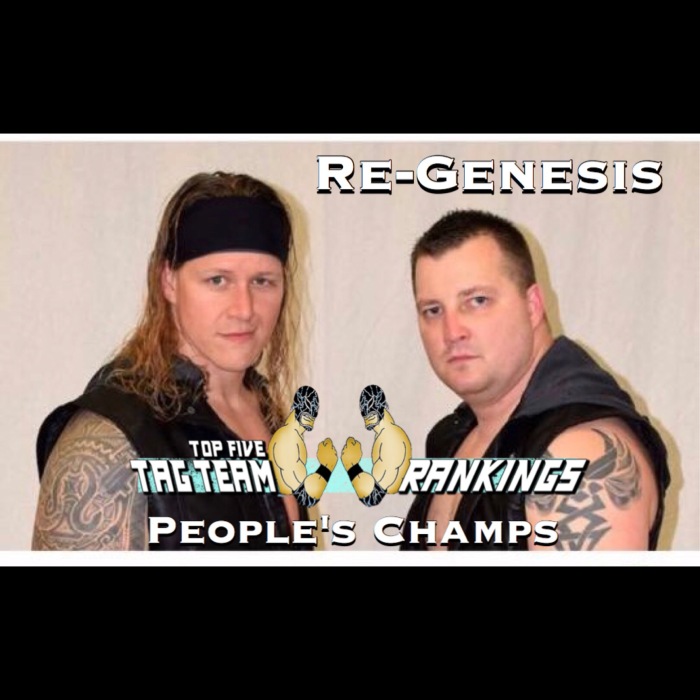 Dumpster Divers-#2 in the online voting competition with 55 votes

Middlesex Express-#3 in the online voting competition with 48 votes

Hate Club-#4 in the online voting competition with 38 votes

Bomb Shelter-#5 in the online voting competition with 24 votes

You can listen to the Indy Power Rankings Reveal/Carolina Corner here: http://www.blogtalkradio.com/elitepodcastnetwork/