#1 Ilja Dragunov-Once again, we have another year where the wXw 16 Carat Gold Tournament determined who was #1 in the Indy Power Rankings the following week. This is also historic as Ilja Dragunov is our first Russian ranked #1 in the Indy Power Rankings. He made it happen after he defeated Robert Dreissker in Round 1 on 3/10, then defeated Timothy Thatcher in Round 2 on 3/11, then defeated Bad Bones John Klinger in the semifinals on 3/12, and then defeated WALTER in the final the same day to win the tournament with a 4-0 week in Germany. It was an absolutely amazing performance by a competitor who has been ranked before, but never this high as he rewrote the history books with his awesome weekend in Europe.

#2 Nick Depp (@NickDepp270)-The 2017 IWA Mid-South Prince of the Death Matches came oh so close to his first #1 ranking, but was barely beaten out by Ilja Dragunov. On any other week, it’s likely that Depp would have had his first number one, but it wasn’t to be this week. He had a FANTASTIC week to get his highest ranking ever as he beat Ray Waddell at IWA on 3/10, then defeated Amazing Maria in the first round at IWA Mid-South on 3/11, then defeated Mitch Ryder in the semifinals, and then defeated Mance Warner in the final to win the Prince of the Death Matches tournament to go 4-0 for the week. It was a bloody, brutal tournament…and it earned Depp not only a spot in the IWA King of the Death Matches for 2017, but a very impressive #2 ranking this week as well. He was also #4 in the online voting competition with 38 votes.

#3 People’s Champ. Jon Davis (@JonDavis817)-On a week with multiple tournaments it was especially difficult to determine rankings, but the two competitors who won tournaments AND went 4-0 ended up at #1 and #2 while Jon Davis ended up at #3 in addition to winning this week’s online voting competition with 178 votes. The People’s Champ this week (for a third time since the online vote’s inception) defeated James Drake at WWN Style Battle on 3/12 in the first round of the tournament, then beat Parrow in the Semi-Finals, and then beat Jason Cade in the Finals to go 3-0 for the week and win the tournament. You can give a like to his Facebook page here: https://www.facebook.com/BookJonDavis and promoters can book the big man at bookjondavis@gmail.com 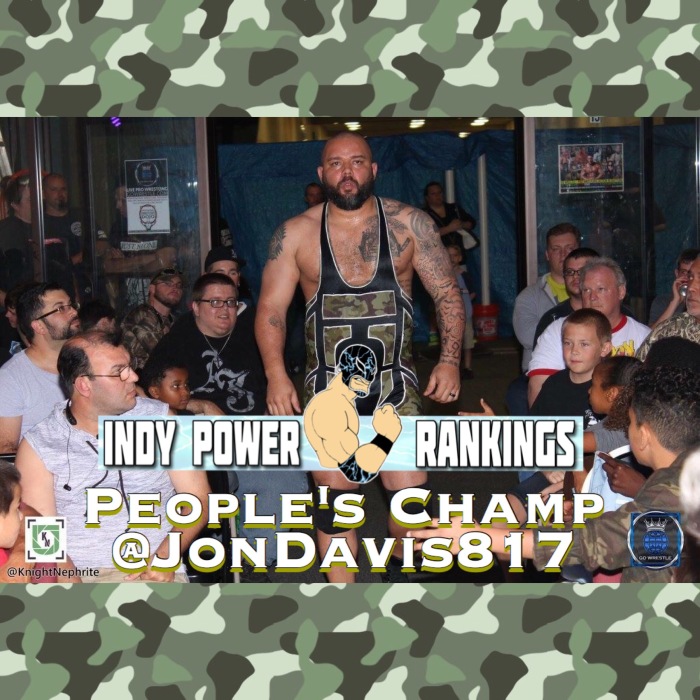 #4 Trent Seven (@trentseven)-1/2 of Moustache Mountain and one of the stars of WWE’s UK Division gets another ranking this week after a phenomenal week in the UK. The ICW World Heavyweight Champion defeated Jordan Devlin at ICW on 3/10 to retain the title, then defeated Jack Jester on 3/11 to retain again, and then defeated BT Gunn, Chris Renfrew & Pete Dunne in a four-way to retain again and go 3-0 for the week. Three wins. Three title defenses. Take nothing away from Trent Seven at #4 because honestly, just like #2 and #3 this week, on most other weeks he’d be sitting at the top of the rankings at #1.

#5 Matt Riddle (@riddletuf7)-BRO gets himself another ranking this year as he was an absolute work horse last week in Europe. The PROGRESS Atlas Champion competed in NINE matches as he defeated TK Cooper at PROGRESS on 3/6 to retain the title, then defeated Rob Lynch on 3/7 to retain again, then lost a non-title match to David Starr at Westside Xtreme in Germany on 3/9, then defeated Donovan Dijak at wXw on 3/10, then defeated Mike Bailey in the first round at wXw on 3/11, then defeated Bobby Gunns in the semifinals, then defeated Timothy Thatcher in the final to win the Amibition 8 tournament, then defeated Mike Bailey the same day in the wXw 16 Carat Gold Tournament, and then lost to WALTER in the semifinals on 3/12 to go 7-2 for the week. What a week from Riddle. The man’s gonna need a break with that type of schedule, but as it stands, Riddle is dominating the indies in 2017.

#10 Archadia-#2 in the online voting competition with 161 votes

Chris Slammer-#3 in the online voting competition with 46 votes

Stefany Sinclair-#5 in the online voting competition with 31 votes

Zack Monstar-#6 in the online voting competition with 20 votes

You can listen to the Indy Power Rankings Reveal here: http://www.blogtalkradio.com/elitepodcastnetwork/