Who we are and how the final vote is tallied: http://wp.me/P4kQ6t-1&#x200b​
Winner of the online voting competition is “People Champ” for the week AND helps their overall ranking! There is no award for second place but all votes that come in add to the wrestler’s final ranking so vote away!

Snooty Foxx outlasted 16 other men to win the $1,000 over the top rope Battle Royale

Thanks to Rufus Peters for results! 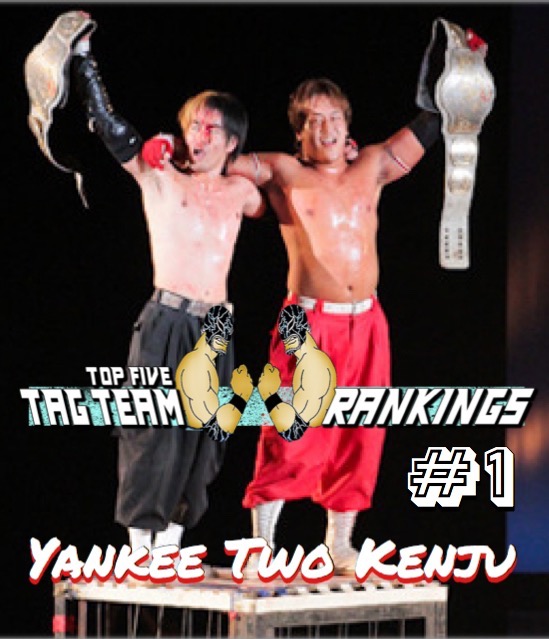 #1 Yankee Two Kenju (Isami Kodaka & Yuko Miyamoto)-Could this week have been any more busy for this duo? Just look at what they did: They defeated Masaya Takahashi & Takayuki Ueki at BJW on 8/15, then teamed with Kankuro Hoshino on 8/16 to defeat Masaya Takahashi, Ryuji Ito & Takayuki Ueki, then teamed with Ryuji Ito the same day to defeat Daisuke Sekimoto, Kazumi Kikuta & Yasufumi Nakanoue; then defeated Kazumi Kikuta & Yoshihisa Uto on 8/17, then teamed with Toshiyuki Sakuda the same day to lose to Abdullah Kobayashi, Jaki Numazawa & Ryuji Ito, then defeated Kota Sekifuda & Tatsuhiko Yoshino on 8/18, then teamed with Ryota Hama & Yasufumi Nakanoue the same day to defeat Great Kojika, Kankuro Hoshino & Strong BJ (Daisuke Sekimoto & Yuji Okabayashi) and then defeated Minoru Suzuki & Mitsuhisa Sunabe at Oz Academy on 8/21 to go 7-1 for the week. With a record like that in one week, it was really impossible to keep them out of the #1 spot this week.

#3 Moustache Mountain (Trent Seven & Tyler Bate)-The NEW Chikara Campeonatos de Parejas defeated Los Ice Creams (El Hijo del Ice Cream & Ice Cream Jr.), N_R_G (Hype Rockwell & Race Jaxon) and The Devastation Corporation (Blaster McMassive & Flex Rumblecrunch) in a four-way double elimination match on 8/21 to win the titles. Because of that win, they earn their first ranking this week. On another week where teams are 7-1 and 4-0, they likely would be competing for the top spot. Look out for Moustache Mountain to start to make some noise if they can turn this title victory into some serious momentum.

#4 Ugly Ducklings (Colby Corino & Lance Lude)-This stable continues to make waves as 2/3’s of the PWF Trios Champions defeated The Brutes on 8/20 at WZW and then teamed with Rob Killjoy at PWX on 8/21 to defeat The Gouge Wrestling All-Stars (Timmy Lou Retton, Chet Sterling, & Mickey Gambino) to go 2-0 for the week. Their body of work in 2016 really does speak for itself as they are continuing to set the indies on fire. This is a team that came out of nowhere to make an impact in the Indy Power Rankings this year and it really doesn’t look like that’s changing any time soon.

#5 EC3, Dustin, & Drew Galloway-Once again EVOLVE takes center stage as the EVOLVE Tag Team Champions (Galloway & Dustin) teamed with EC3 to pick up a big win vs. TJP, Fred Yehi, and Ethan Page on 8/20 to retain the titles. While this victory doesn’t really help them in the Tag Team Top 50 standings, it does get the trio their first ranking together as a team. Will this alliance continue? We’ll have to tune into WWN Live for the rest of 2016 to find out.

People’s Champs. Guns & Aggression (Luke Lawson & Mance Warner)-This tag team gets their first People’s Champs award this week after a strong showing (no pun intended) at Strong Style Wrestling on 8/20 where they defeated The Brotherhood. They were outlast SuperFabulous in the online voting competition, 83 votes to 74 to bring home the win. Give a like to Luke Lawson’s Facebook page here: https://www.facebook.com/SharpshooterLawson/ and there should be Guns & Aggression shirts up soon here: http://www.prowrestlingtees.com/wrestler-t-shirts/sharpshooter-luke-lawson.html

SuperFabulous-#2 in the online voting competition with 74 votes

The Punkadelics-#3 in the online voting competition with 23 votes 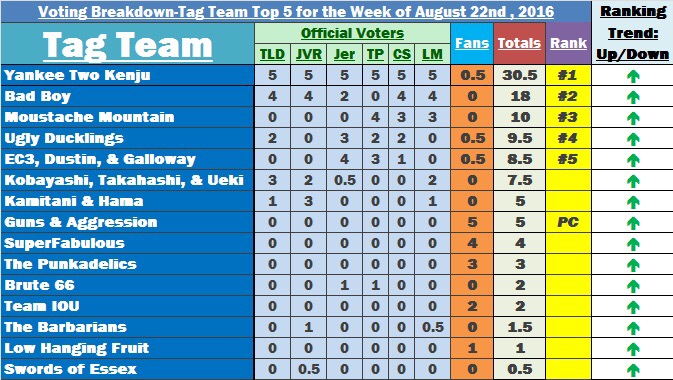 #1 Timothy Thatcher-It’s a CLEAN sweep of the official voters at #1 for Timothy Thatcher as the EVOLVE Champion was the clear #1 this week. On 8/19 he defeated Matt Riddle in a No Holds Barred Match to retain the title and then beat Drew Gulak the following evening to retain once again. “The British Messiah” has been proudly carrying the all-important EVOLVE Title since 7/10/15, which is 410 days as of today. He’s had a lot of strong challengers, but with people like Zack Sabre Jr. lining up for a shot at the gold, how much longer can he hang onto that title?

#2 Pentagon Jr. (@PentagonJunior)-This Mexican talent just continues to impress anywhere he goes and has once again added another title to his collection after winning the PCW Heavyweight Title tournament over the weekend. On 8/20 he defeated Willie Mack in the First Round and then beat Brian Cage in the Finals to win the vacant title. He also picked up a win in AAA that didn’t count towards our rankings, but regardless, Pentagon Jr. has been one of the major breakout stars of 2016 so far. Keep an eye on him as the year continues and HE continues to be one of the best in the world.

#3 Chris Hero (@TheChrisHero)-Despite no major titles to speak of, Chris Hero is STILL having a phenomenal 2016. Hero has been on an absolute tear as of late and continued that with a victory over Shigehiro Irie at AAW Showdown on 8/19 and then scored what some considered an upset by beating Cody Rhodes at EVOLVE 67 on 8/20. A 2-0 weekend lands Hero at the #3 spot. The only thing that would really help both his weekly ranking and yearly ranking along would be a TITLE belt. He’s been in some notable title matches as of late, but has fallen short. What’s next for Hero?

#4 Gunner (@GUNNER_ChadLail)-VERY good weekend for the former TNA star as he adds the WrestleForce Title to his mantle after defeating John Skyler for the gold at WrestleForce Meltdown 2016 on 8/20. He then went from SC to NC as he defended and retained the PWX Innovative Television Title vs. David Starr at Scouts Honor: Over 4 Life on 8/21. A 2-0 week gets him the #4 spot and with multiple titles now in his possession in the Carolinas, look the hell out for Gunner to really start getting some momentum going in the rankings.

#5 Ricochet (@KingRicochet)-Ricochet did what he always does over the weekend as he had two show-stealing contests in the Midwest. On 8/19 he defeated Dezmond Xavier at AAW in a match where Xavier may have turned a lot of new heads and then he beat Matt Cross at SSW on 8/20 in an absolute classic to go 2-0 for the week. The 2014 IPR 100 #1 may have some other things on his mind towards the end of 2016/beginning of 2017, but he’s still having some classic matches on the indies in the meantime.

People’s Champ. Logan Lynch (@theloganlynch)-The NEW WPW X-Division Champion earned his first People’s Champ award on the strength of a very impressive 167 votes from his fans this week. Of course, it was his win vs. Chase McCoy and TW3 in a Triple Threat on 8/19 to win the title that got him on the ballot in the first place. It was a tight contest in the online voting competition for most of the day, but Lynch pulled away at the end with a 58 vote margin of victory. Be sure to check out Wisconsin Pro Wrestling on Facebook at https://www.facebook.com/wisconsinprowrestling for more info on when you can see Logan Lynch again!

Gunner Miller-#2 in the online voting competition with 109 votes

Maverick-#4 in the online voting competition with 41 votes 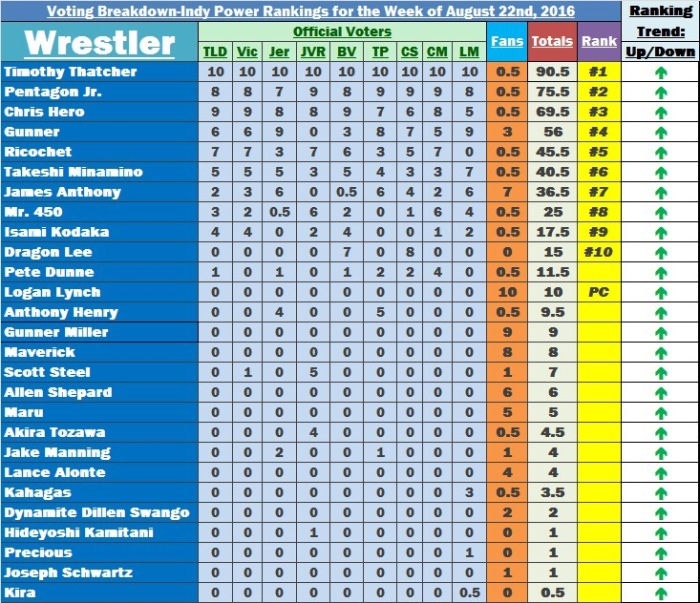 Who we are and how the final vote is tallied: http://wp.me/P4kQ6t-1​
Winner of the online voting competition are “People Champs” for the week AND helps their overall ranking! There is no award for second place but all votes that come in add to the tag team’s final ranking so vote away!

Winner of the online voting competition will have their social media, merchandise, upcoming events, etc…promoted by us for a full week! Voting ends at 10 PM EST! 8/23

Jason Cade defeated Ethan Case by DQ. Case former partner Elijah Evans IV interfered causing the intentional DQ to his former partner. Post match, Elijah attacked Case with a sledgehammer and cut his hair in the middle of the ring

The Revolt welcomed new PWX Champion “Manscout” Jake Manning to the ring for a championship celebration. Zane & Caleb showed a special tribute video while drinking mimosas mid ring but at the end of the video Zane cracked Manning on the head with the champagne bottle as The Revolt turned on their former friend busting him open. Manning’s opponent later in the night Cedric Alexander came out for the save

Following  the match, Manning showed respect to Alexander who he helped mentor and Alexander had his curtain call at PWX in the middle of the ring. Alexander talked about his being “scouted heavily” by WWE and also about how he feels he was misused his last 2 years in ROH, (which nearly made him quit wrestling). Cedric then thanked PWX and the fans for “keeping his career alive” during that time. “Thank You Cedric!” ends the show as many athletes from the back come out to give Cedric a proper sendoff.