#1 Tommy End (@tommyend)-So Tommy End has maybe the most momentum in the world right now as he has reached #1 in the Indy Power Rankings and REPORTEDLY signed a developmental contract with WWE. One is probably true and the other is absolutely true. We’ll let you figure out which is which. Anyway, Tommy End had a great week as he defeated Sami Callihan at Progress on 5/30 in the quarterfinal,; then defeated Chris Hero in the semifinals the same night, then defeated Mark Andrews in the final to win the Super Strong Style 16 Tournament. His weekend took a bad turn (but obviously not too bad) as he then teamed with Michael Dante & Mikey Whiplash at wXw to lose the tag titles to Cerberus (Dirty Dragan, Ilja Dragunov & Julian Nero) to go 3-1 for the week. 3-1 with this quality of competition was better than most this week and it JUST slid him into the #1 spot. Congrats to Tommy End on ALL of his achievements!

#2 Danny Havoc-The only major debate between the official voters at the #1 spot this week was between Tommy End and Danny Havoc. In the end, well, Tommy END managed to defeat Havoc. End was the only one that could beat Havoc this week as Danny Havoc returned to his winning ways in Death Match Tournaments as he defeated Markus Crane in the First Round of the GCW Tournament of Survival, then beat Viking in the second round, and then beat John Wayne Murdoch, Bryant Woods, and Marcus Crane in the Finals to win the tournament with a 3-0 record. This is the highest ranking ever for Danny Havoc and PERHAPS a return to the spotlight? We shall see.

#3 Mark Andrews (@MandrewsTNA)-“Mandrews” returns to the Top 10 as he had a week that really rivaled almost anyone on the indies. He won a 10-way qualifying match at Progress on 5/30, then defeated Mikey Whiplash the same day in the quarterfinals, then defeated Zack Gibson in the semifinals, then lost to Tommy End in the final of the Super Strong Style 16 Tournament. He then bounced back as he teamed with Nixon Newell & Jim Hunter at Attack on 6/3 to defeat Damian Dunne, Mondai Lykos & Pete Dunne to go 4-1 for the week. Not a bad week at all for Mark Andrews as he and a host of others continue to prove that European wrestling is dominating 2016.

#4 Marty Scurll (@MartyScurll)-Speaking of European wrestling dominating 2016, with ZSJ currently on the shelf, Marty Scurll is a top contender for the #1 spot in the IPR 100 right now. Can he make it happen? Well, we’ll see, but this week is just another building block to get there in December. The Progress World Champion defeated Matt Cross at RPW on 6/2 and then beat Big Damo on 6/5 to go 2-0 for the week. Two very good wins and his overall reputation this year were all he needed to solidify himself in yet another high ranking. Look out for him to continue his push as the year rolls on.

#5 Scotty Swift (http://www.facebook.com/pages/Scotty-Swift/861864623835450 )-Make that 4 out of the top 5 this week who are coming to us by way of Europe. The “Red Haired Warrior” gets his first ranking this week after a very good week for the Aberdeen, Scotland native. The Wrestlezone Undisputed Champion defeated Shawn Johnson by count-out at WrestleZone on 6/4, then defeated The Dominator the same day, then defeated Crusher Craib to retain the title the same day, and then defeated The Dominator the same day to go 4-0 for the week. If he can start mixing the competition up and combine that with this quantity of wins, he could be a force to be reckoned with for the remainder of 2016.

#6 Drew Galloway (@GallowaySpeaks)-Despite being active with a lot of other things, Drew Galloway is never far from the minds of Indy Power Rankings voters after his last 2 years on the indies. The TNA World Heavyweight Champion continued to establish himself on the indies as he beat Lionheart at PCW on 6/4 and then won a #1 Contenders Battle Royal the same day. If he ends up winning that PCW Title, look the hell out. Galloway is already dangerous with how good he’s been over the last couple of years, but if he starts collecting titles again, he may start making another strong push for a higher ranking in yet another IPR 100.

#7 Randi West (@RanWestWrestlin)-“The Toughest Broad in Wrestling” is BACK in the Indy Power Rankings yet again this year as she had a pretty successful week in the Midwest, continuing a year that has been very fruitful. On 6/2 she defeated Amazing Maria at IWA Mid-South, then lost a hard-hitting match to Jonathan Wolf on 6/3, but it was smooth sailing after that she then teamed with Rob Fatone at SNPW on 6/3 to defeat Thunderkitty & FIA, then defeated Thunderkitty by DQ on 6/5, and then teamed with 2 Tuff Tony to defeat Thunderkitty & Joseph Schwartz to go 4-1 for the week. Wins just keep coming her way as Randi West continues to prove why she’s been doing this so well for so long. She was also #5 in the online voting competition with 21 votes.

#8 CJ Ward-It’s the first-ever ranking for CJ Ward after a 4-0 week. The NEW MSWA Cruiserweight Champion defeated Dustin Bozworth at MSWA on 6/3, then defeated Prince Mahali, Gemini, Terry Pantera, Korvin Sage and Brock Landers in a six-way the same night to win the title, then defeated Prince Mahalli by DQ on 6/4 to retain the title, and then teamed with Drake Gallows, Gemini & Korvin Sage the same night to defeat Prince Mahalli, Mr. Barnes, Vinny Pacheco & Brock Landers. If he can really start to improve on the strength of competition (no offense to those involved) he’ll be on our radar again as the weeks continue.

#9 People’s Champ. Stryknyn-“The Lethal Dose” came out of nowhere to win the online voting competition but it was well deserved as he parlayed that into a #9 ranking. The WWW, APW, Southern States Champion, and NEW SFCW Champion defeated Tristan Blaze at APW on 6/3 and then beat Drew Adler at SFCW on 6/4 to win the title to go 2-0 for the week. He collected 136 votes from his fans and supporters to edge out AJ Reign for the People’s Champ award this week which propelled him into the #9 ranking. You can like his Facebook at https://www.facebook.com/pages/-The-Lethal-Dose-Stryknyn/175410162569991 and follow him on Instagram at @stryknyn

#10 Ryo Mizunami-Flying quietly under the radar this week was Ryo Mizunami as Mizunami defeated DASH Chisako at Wave on 6/2 in the quarterfinals, then defeated Yoshiko on 6/5 in the semifinals, and then defeated Tsuakasa Fujimoto in the final the same day to win the Catch the Wave 2016 Tournament to go 3-0 for the week. As it stands, Mizunami gets the #10 ranking but on a week with multiple other tournaments going on, it was probably a bit low. That’s the unfortunate luck of the draw on weeks like this though.

AJ Reign-#2 in the online voting competition with 102 votes

Shane Mercer-#3 in the online voting competition with 37 votes

Dave Crist-#4 in the online voting competition with 36 votes 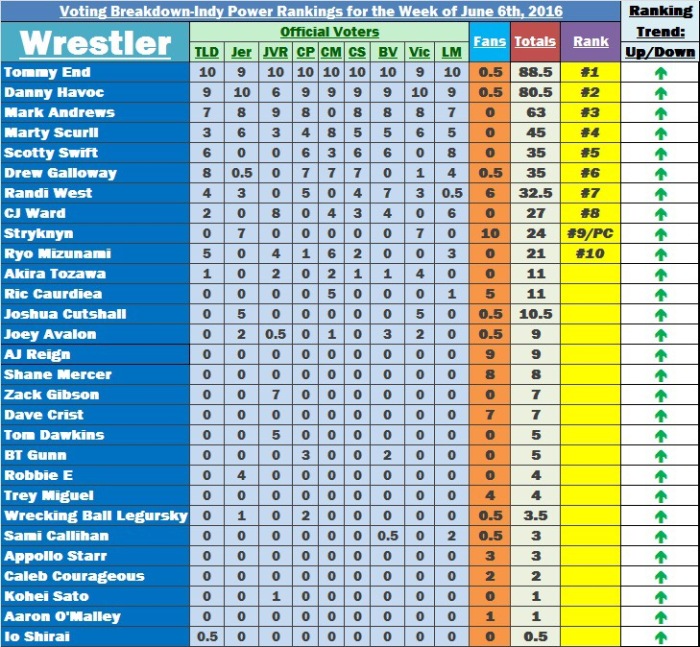