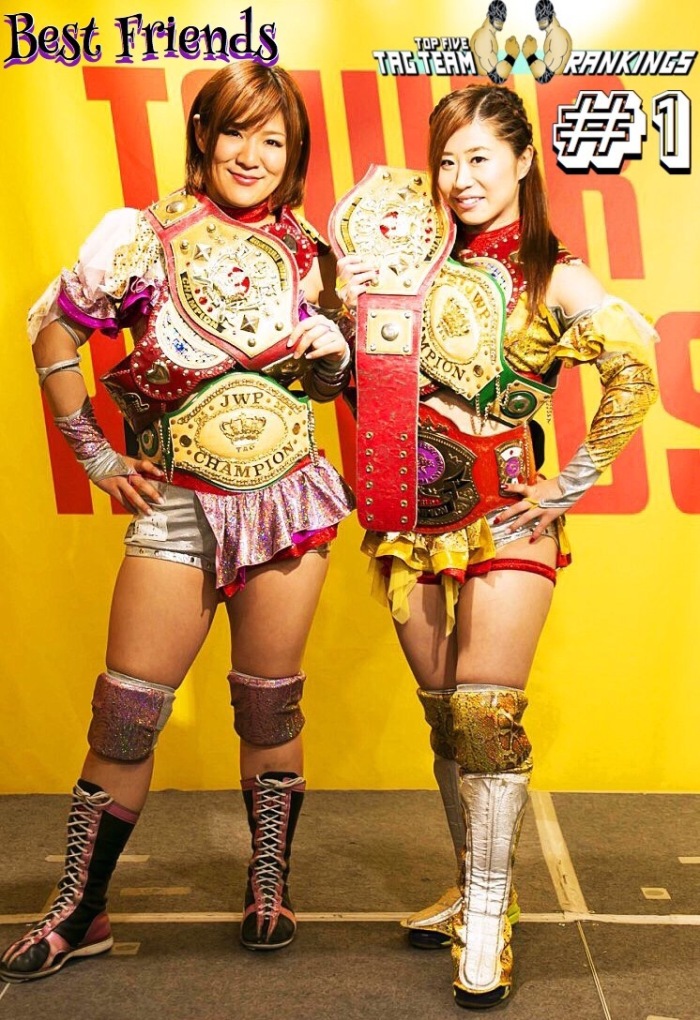 #1 Best Friends (Arisa Nakajima & Tsukasa Fujimoto)-This tag team FINALLY gets their elusive #1 ranking they’ve been searching for all of 2016. The JWP, Daily Sports, and International Ribbon Tag Team Champions went 3-0 as they defeated Meiko Tanaka and Sareee at Diana on 4/8, then defeated Ozaki~gun (Maya Yukihi and Mayumi Ozaki) at Oz Academy on 4/9, and then defeated Maya Yukihi & Mayumi Ozaki again on 4/10 at Oz Academy. This was a difficult week to judge as there were some pretty big wins all over independent wrestling, but very few teams with multiple wins. Some voters felt like the QUALITY of some of the other teams’ wins outweighed the QUANTITY of wins that Best Friends put together, but in the end, Best Friends got the nod from the official voters. Congrats to a team who are in STRONG contention for the #1 spot in the Tag Team Top 50 this year.

#2 Davey Vega & Mat Fitchett-In terms of QUALITY wins, beating The Hooligans is a pretty big win. Combine that with winning the prestigious AAW Tag Team Titles and you’ll see why Vega & Fitchett got some support for the #1 ranking this week from at least one official voter. While Vega & Fitchett may not have as strong of a history of teaming as a team like Best Friends, beating The Hooligans on that AAW stage with all of the things going on that day, meant a lot. Much like past AAW Tag Team Champions, Davey Vega & Mat Fitchett will now have a leg up on possible rankings in the future should they be able to continue to defend these titles.

#3 The Punkadelics (James Morrison & Vince Lewis)-The NEW NWA Florida Tag Team Champions are another in the long line of new teams to the rankings this year. They won the titles in a tournament for the vacant titles on 4/9 as they defeated Color Money in the First Round at NWA FWA and then beat The Misled Youth in the Finals to win the titles. This team is located in the hot bed of wrestling right now as Florida seems to be getting a ton of talent coming through whether it’s in NXT or otherwise. If they can step up their competition and defend these titles regularly, look for them to make an impact in the rankings this year.

#4 NVD (Shane Mercer & Hy Zaya)-So Ninja vs. Demon gets their first ranking as a team with one of the biggest wins of the week. On 4/8 at PWF’s return show, they outlasted Team IOU and Roscoe Eat Lisa in the main event to score one of their biggest wins as a unit. The duo is more known for some of their singles accomplishments (both are former IWA Mid-South World Champions) but as a tag team, they could be very dangerous if they continue to team frequently. With one HUGE win under their belt, they could certainly build on that momentum as they look to take continue to build their confidence as a team.

#5 London Riots (James Davis & Rob Lynch)-The FPW Tag Team Champions return to the Tag Team Top 5 this week as they picked up a pretty impressive win in the UK on 4/10. They defeated DND (Cieran Donnelly & Danny Duggan), Justice Duo (Poppa & Rayman) and The Ruckers (Jordan & Nick) in a four-way at IPW:UK, which is one of the top promotions in England. Now with a bit of steam on their side, this team MAY be poised to make a big run like the one they had in 2014. Look out for them to try to make some noise this year.

People’s Champs. Team IOU (Kerry Awful & Nick Iggy @TeamIOU)-It was a busy week for The Carnies as they started off the weekend slowly with a loss to NVD at PWF on 4/8. Luckily for them, they had already defeated DJ and Poncho Arp at APW on 4/7. The PGP Tag Team Champions then went to UIW on 4/9 and defeated Bobby & Kevin Park to go 2-1 for the week. While you may look at the poll and see Jersey Dukes in the #1 spot, keep in mind that the cutoff was 10 PM EST, so they actually passed IOU AFTER the voting was closed. Here is all the information on how you can support one of the best tag teams on the indies-

You can buy their t-shirts and support them monetarily here: http://www.prowrestlingtees.com/wrestler-t-shirts/team-iou.html

You can subscribe to their videos on YouTube by searching “TeamIOU” and subscribing for promos, matches, & more!