Skip to content
HomeIndy Power Rankings for the Week of March 21st, 2016

#1 Timothy Thatcher-The EVOLVE Champion returns to the top spot for the very first time in 2016. He had a STELLAR weekend at both EVOLVE and Tier-1. His week started out strong with a victory over Matt Riddle at EVOLVE on 3/19 to retain the title,1 then he beat Tommaso Ciampa at Tier-1 on 3/20, and then he wrapped up his perfect win by beating FIP World Champion (and former #1) Caleb Konley at EVOLVE the same day to retain the title once again. He wrestled only two days (that we’re aware of) but still managed a spectacular 3-0 record. This is his first #1 ranking since the Week of November 9th, 2015: https://indypowerrankingsipr.wordpress.com/2015/11/10/indy-power-rankings-for-the-week-of-november-9th-2015/

#2 Princess Kimber Lee (@Kimber_Lee90)-The Princess herself gets her highest ranking of 2016 and her first since the Week of February 1st, 2016 when she was ranked #5. The CHIKARA Grand Champion defeated Su Yung at Queens of Combat on 3/18 and then followed that up with a tremendous victory vs. Heidi Lovelace at CHIKARA on 3/19 to retain the title. A 2-0 week nets her a hell of a ranking on a HIGHLY competitive week. At two different times in 2015 she soared to a #1 ranking…so now the question is, when does it happen in 2016? She’s definitely blazing a trail on the road and picking up wins and rankings along the way. Can she top her #10 ranking in the IPR 100 from 2015? Full list here: https://indypowerrankingsipr.wordpress.com/2015-ipr-100/

#3 TJ Perkins (@MaskaraManik)-As crazy as this sounds…this is the first EVER ranking for TJ Perkins. His time with TNA, etc… has limited his chances at getting a crack at the Top 10 in the past. This week was special for the veteran as he managed to top two of the best in the world when he beat Sami Callihan at EVOLVE on 3/19 and then defeated Tommaso Ciampa at EVOLVE on 3/20. A perfect 2-0 week at EVOLVE against two former #1’s in unquestionably worthy of a Top 3 ranking. Can he build on this and possibly get into this year’s IPR 100? He may have some work to do, but he’s definitely more than capable of making it happen.

#4 Ethan Page (@OfficialEGO)-“All Ego” came soooo close to making this his first-ever #1 ranking, but he just fell short as he took a loss at Tier-1 that ultimately cost him the top spot this week. With that being said, #4 is nothing to be ashamed of, especially on an insane week of action like this. The AIW Absolute Champion started off the week by beating Zack Sabre Jr. at AIW on 3/18 to retain the title, then he beat Jack Gallow at EVOLVE on 3/19, but lost to VSK at Tier-1 on 3/20, and then bounced back by defeating Fred Yehi at EVOLVE the same day. So it wasn’t a perfect week for Page, but a 3-1 week does get the #4 spot. On top of the great record, keep in mind he knocked off the back-to-back #1, Zack Sabre Jr. Look out for “All Ego” to continue this great run.

#5 Kongo Kong (@RealKongoKong)-The Monsta who many official voters call “the baddest man on the planet” returns to the Top 10 this week for the first time since the Week of December 28th, 2015 (a week that technically counts towards the 2016 IPR 100). He ran through a Moose and a Rhino over the weekend as he knocked off ROH star, Moose at AAW on 3/18 and then followed that up with a win vs. former ECW World Champion, Rhino at Crossfire in Canada on 3/20. A 2-0 week is good, but when you look at who he beat, you’ll see why he managed to get his highest ranking this year. The big man is still IWA World Champion and now that IWA is back, you’ll likely see him more frequently on his quest for a third straight year in the Top 10 of the IPR 100.

#6 AR Fox-One of the truly amazing high flyers is back at it again as he gets another ranking this year. The WWA4, DREAMWAVE Alternative, and AAW Heritage Champion had another great week as he beat Fred Yehi on 3/17 at WWA4 to retain that title and then beat Davey Vega at AAW on 3/18 to retain that title. Fox beat two of the really up and coming young stars on the indies…who both were undoubtedly looking to take his spot. For now, Fox keeps his spot at or near the top of several promotions as his fantastic 2016 just continues to roll on. What’s next for “The Whole Foxin’ Show?”

#7 Timmy Lou Retton (@timmylouretton)-T.L.R. was really a victim of circumstance this week as two of his wins didn’t come to us until late Monday night. The GOUGE Champion was amazing last week. He defeated Mickey Gambino on 3/18 to retain the title, then teamed with Lance Lude to defeat The Gorilla Squad in the semi-finals of the Ivan Koloff Tag Team Tournament and then beat Joe Black & Mickey Gambino in the finals at HCW on 3/19 to win the tournament. He then defeated Shane Andrews at Action Packed Wrestling on 3/20 to go 4-0 for the week. This is his first ranking since the Week of February 8th, 2016: https://indypowerrankingsipr.wordpress.com/2016/02/09/indy-power-rankings-for-the-week-of-february-8th-2016/

#8 Tsukasa Fujimoto-1/2 of the International Ribbon, JWP and Daily Sports Tag Team Champions gets his first ranking since the Week of December 28th, 2015. She teamed with Arisa Nakajima at Oz Academy on 3/14 to defeat Kagetsu and Kaho Kobayashi, then teamed with Arisa Nakajima, Mayumi Ozaki & Yumi Oka the same night to defeat Koharu Hinata, Rabbit Miyu, Sareee and Yuka, then teamed with Arisa Nakajima at Ice Ribbon on 3/19 to defeat Risa Sera and Tsukushi, then teamed with Risa Sera at Ice Ribbon on 3/20 to defeat Hamuko Hoshi and Mochi Miyagi, and then won a battle royal the same night to go 5-0 for the week. If it seems like a 5-0 record should place Fujimoto higher, keep in mind that 4 of the wins were tags, so a lot of the official voters didn’t give as much weight to those wins. That being said, Tsukasa Fujimoto is having one of the best years of any female in 2016.

#9 Zack Sabre Jr. (@zacksabrejr)-The back-to-back #1 finally falls, but surprisingly, he doesn’t fall out of the Top 10 completely on this busy week. The PWG World Champion and Revolution Pro British Heavyweight Champion started off the week slow when he lost to Ethan Page on 3/18, but quickly bounced back, defeating Johnny Gargano at EVOLVE on 3/19 and then Drew Gulak at EVOLVE on 3/20. A 2-1 week may seem less than great, but consider who he beat, and the fact that many official voters factor his year as a whole into their week by week voting. ZSJ may not be #1 this week, but he still holds the top spot in this year’s IPR 100 as of this week.

#10 Sami Callihan (@TheSamiCallihan)-ZSJ’s closest competition for this year’s #1 ranking (as of today) gets into the Top 10 again after a brief hiatus. “The Callihan Death Machine” and AAW Heavyweight Champion teamed with Dave Crist at AAW on 3/18 to defeat Shane Hollister & Markus Crane. He then beat Ricochet the same day to retain the title. His EVOLVE weekend didn’t start out how he wanted after a loss to TJ Perkins on 3/19 but he rebounded with a win vs. Tracy Williams at EVOLVE on 3/20 to go 3-1 for the week. It may not have been a perfect week for Callihan, but he couldn’t be denied a ranking based on everything he did.

People’s Champ. Devin Driscoll (@Devin_Driscoll)-The NEW OVW Heavyweight Champion gets his first mention in the Indy Power Rankings after defeating Ryan Howe on 3/19 to win the title. With 76 votes, he dominated all other challengers in this week’s online voting competition. He is this week’s “People’s Champ” and with this type of success, it’s entirely possible that he could pop up in the official Top 10 in the upcoming weeks/months.

Moonshine Mantell-#2 in the online voting competition with 43 votes

The Buggane-#3 in the online voting competition with 27 votes 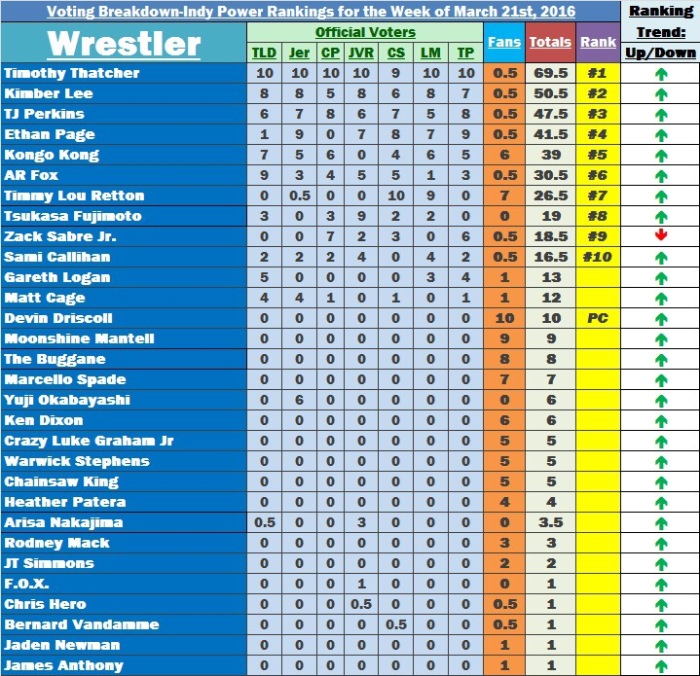