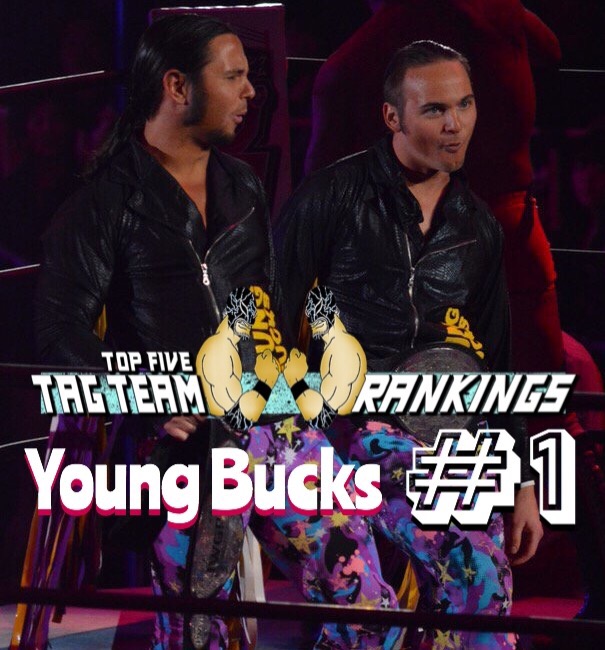 #1 Young Bucks (Matt & Nick Jackson)-The consensus best tag team in the world gets their first #1 ranking of 2016 as most of their work has taken place in places that don’t qualify for the Indy Power Rankings. Their wins at PWG prove that they’re just as good and relevant as ever. First, they beat Matt Sydal & Ricochet at PWG on 3/4 to retain the PWG World Tag Team Titles and then they beat reDRagon (Bobby Fish & Kyle O’Reilly) on 3/5 to retain the titles again. A 2-0 week on a week that was quite frankly sort of weak for tag team rankings equals a clean sweep of the official voters this week. The Bucks, even part time on the actual indies, are still DOMINANT.

#2 Dragon Kid & Yosuke ❤ Santa Maria-NOW we start to see the return of some of that Dragon Gate tag team dominance from an unlikely team. This pairing defeated Over Generation (Eita & Takehiro Yamamura) at Dragon Gate on 3/2 and then beat a different combination of Over Generation (CIMA & Eita) on 3/3 to go 2-0 for the week. This is actually one of the few Dragon Gate teams to crack the Top 5 so far this year. After a year of dominance in 2015, the scrutiny on some of their perceived “empty” wins are definitely limiting their rankings a bit. Can they overcome it with some big rankings in the next few weeks & months?

#3 Lee Byford & Brett Ison-Here’s a team that went to war with one another for a LONG time before finally figuring out that they could make one hell of a team. On 3/5 they teamed to defeat the back-to-back 2014 and 2015 Tag Team Top 50 #1’s in The Hooligans (Devin & Mason Cutter). That big victory alone got them all the way to the #3 ranking this week as again, it wasn’t the strongest week for tag team wrestling outside of PWG. If this duo can continue to get along and pick up victories, they could very well be a team to look out for this year. Two intimidating guys who can absolutely dominate. Keep an eye on them.

#4 The Hunter Brothers (Jim Hunter & Lee Hunter @JimnLeeHunter)-The Kamikaze Pro and 4FW Tag Team Champions return to the Top 5 this week after they defeated Born 2 Fly (Kieran Young & TJ Sky) and Elliott Jordan & Mika in a 3-Way at Kamikaze Pro on 3/4 to retain the titles. They then beat The Alpha Brothers (Johnny & Ricky) at LCW on 3/5 to go 2-0 for the week. It was clear that they deserved a ranking this week and really the only thing that kept them from being even higher is that they didn’t beat any teams that are super well-established. There’s no doubt you’ll see them back again as they were #13 in the 2015 Tag Team Top 50. It’s unlikely that they would fall much more than that this year barring injuries.

#5 People’s Champs. Team IOU (Kerry Awful & Nick Iggy @TeamIOU)-What a week for Nick Iggy. First, he’s the singles People’s Champ after narrowly winning the online voting competition and then he and Kerry Awful easily won the tag team voting competition to once again become People’s Champs. With 90 votes, they scored their second People’s Champ award of 2016. They’ve won the award countless times since 2014 and this year is shaping up to be no different. Also, it should be noted that this ranking slips them into the #1 spot in this year’s Tag Team Top 50. They’ll need to keep winning if they want to retain that spot because this year is full of parity. Subscribe to Team IOU’s YouTube channel here: http://www.youtube.com/user/TeamIOU and pick up their shirts here: http://www.prowrestlingtees.com/wrestler-t-shirts/team-iou.html 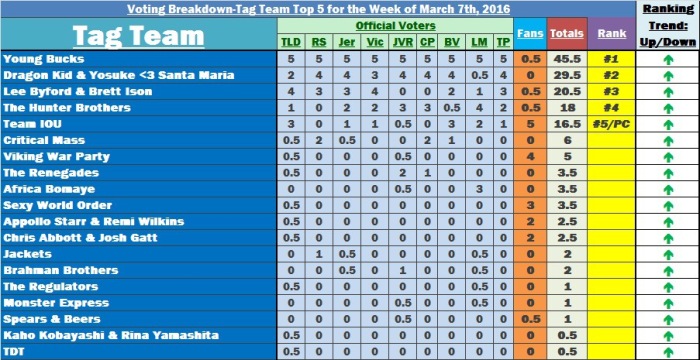 Check out the Indy Power Rankings Reveal as Cloudy joins the show: http://www.blogtalkradio.com/elitepodcastnetwork/2016/03/09/indy-power-rankings-reveal-cloudy-favorite4cast-live 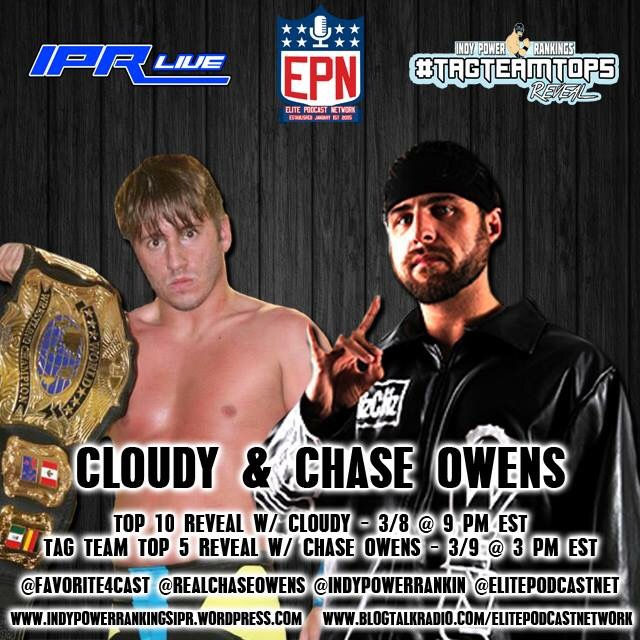