Indy Power Rankings for the Week of November 9th, 2015 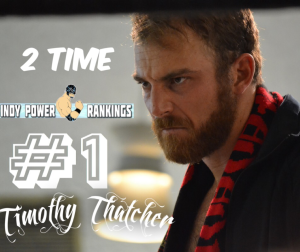 #1 Timothy Thatcher-It was quality over quantity this week as Timothy Thatcher earned his second #1 ranking by virtue of his victories at EVOLVE over the weekend. The EVOLVE Champion (and ½ of the CWF Hollywood and WCA Golden State Tag Team Champions) defeated Johnny Gargano at EVOLVE on 11/6 to retain the title and then beat perennial #1 Drew Galloway on 11/7 to retain the title again. So in one week Timothy Thatcher beat (if you listened to our IPR Reveal last week) two talents who were, as of last week, sitting in the Top 10 in the IPR 100 this year in one weekend. Thatcher had two of the biggest wins of the weekend and that combined with the title he holds and the prestige of the shows helped him to establish himself in the #1 spot again. Perfect timing as we’re less than 2 months away from the IPR 100 Reveal. Where will Thatcher end up? This was a clean sweep of the official voters as ALL of them had him at #1 this week.

#2 Colt Cabana (@ColtCabana)-Boom Boom gets his highest ranking this year as he traveled to NOAH and absolutely had a phenomenal week in Japan. He defeated Katsuhiko Nakajima at NOAH on 11/3, then defeated Maybach Taniguchi on 11/6, then defeated Davey Boy Smith Jr on 11/8, and then teamed with Chris Hero the same day to defeat Killer Elite Squad (Lance Archer & Davey Boy Smith Jr) the same day to go 4-0 for the week. Look at who he is and who he beat and you’ll see why he’s #2 this week. The only thing he’s missing right now is some gold, but with a tag title possibility on the horizon at NOAH…could Cabana change that in 2016? As it is, he’s competing for a spot in the IPR 100. He has a little work to do as it is a DEAD HEAT to get in right now.

#3 Aaron Williams (@PlanetWillams)-The Rockstar Pro Champion and ½ of the Rockstar Pro Tag Team Champions moved up two more spots this week after he defeated Ron Mathis on 11/4 to retain the title, then teamed with Jake Crist on 11/6 to defeat Grits & Gravy (Bruce Grey & Jon Murray), 2-Man Militia (Matt Taylor & Dezmond Xavier), Alex Colon & “Chainsaw” Joe Gacy, Clayton “Pecs” Jackson & Kyle Kraven and OI4K Inc. (Dustin Rayz & Zachary Wentz) in a mosh pit match to retain the tag titles, and then defeated Dave Crist at CZW on 11/7 to retain the Rockstar Pro title to go 3-0 for the week. The Baddest Man on the Planet continues his rise as the IPR 100 approaches. Be sure to check out our interview with him on the Tag Team Top 5 Reveal here: http://www.blogtalkradio.com/elitepodcastnetwork/2015/11/11/indy-power-rankings-tag-team-top-5-reveal-ft-aaron-williams-planetwilliams

#4 Cedric Alexander (@CedricAlexander)-After being on the ballot multiple times this year, one of the best wrestlers on the indies FINALLY breaks through this week after winning the CWF Mid-Atlantic TV Title vs. Chet Sterling on 11/7 and then by following up with a win vs. Lee Valiant on 11/8 to retain the title. A 2-0 record, his prestige and status, along with the title win absolutely helped him into such a high spot this week. It appeared that he might miss out on the IPR 100 this year, but this ranking MIGHT enough to slip him in if he can have some consistency as 2015 comes to a close.

#5 Tsukasa Fujimoto-She gets her first ranking this week after an AMAZING week in Japan. She is the NEW Reina World Women’s Champion (and 1/2 of International Ribbon Tag Team Champions) as she defeated Yako Fujigasaki in the semifinals at Reina on 10/3, then defeated Syuri in the final to win the tournament and the vacant title, then teamed with Tsukushi at Ice Ribbon on 11/7 to defeat Maya Yukihi and Risa Sera, and then teamed with Tsukushi on 11/8 to defeat Hamuko Hoshi and Maruko Nagasaki to go 4-0 for the week. Congratulations to Fujimoto, proving once again that the Indy Power Rankings are truly international AND gender diverse.

#6 Matt Tremont (@TremontCZW)-The CZW World Champion gets himself ranked yet again as he defeated Jake Crist on 11/4 at Rockstar Pro to retain the title and then beat Sid Fabulous at Rockstar Pro on 11/6. He did go to a double knockout with DJ Hyde at CZW on 11/7, which will lead to his next big challenge vs. Hyde coming up. Tremont is having a truly career year as he just continues to rack up rankings, death match tournament wins, and title wins. He’s also one of the truly “good guys” in the business and we love seeing his success.

#7 Taiji Ishimori-It was a solid week for Ishimori as he teamed with Chris Hero & Zack Sabre Jr at NOAH on 11/3 to defeat Suzuki-gun (Davey Boy Smith Jr., Taichi & TAKA Michinoku) then defeated Zack Sabre Jr. & Taichi in a triple threat on 11/6, and then defeated Zack Sabre Jr in a junior heavyweight #1 contender match on 11/8 to go 3-0 for the week. Ishimori has yet to be ranked in 2015 until this week. So with that being said, as the theme of the write-up has implied, Ishimori has some work to do before the end of the year if he wants to slip into the IPR 100. Not an easy task as there have been over 1000 people mentioned this year. Can Ishimori separate himself from the pack?

#8 Tommaso Ciampa (@ProjectCiampa)-Ciampa (the former #1 in the IPR) wins twice over the weekend, but it was his victory over Michael Elgin at AAW on 11/6 that likely impressed the official voters the most. He followed that up with a win vs. Stephen Wolfe at DREAMWAVE on 11/7 to go 2-0 for the week. Very few wrestlers, if anyone, have been as good as Ciampa in 2015 as he is really experiencing a career renaissance this year. We expect this to continue, no matter the stage he’s on, in 2016.

#10 Matt Riddle-After coming very close to a ranking recently, Riddle FINALLY breaks through after having another dominant weekend at EVOLVE. On 11/6 he defeated former #1 Drew Gulak and then followed that up with a win vs. Tracy Williams on 11/7. Riddle appears to be a prospect that really has come out of nowhere to experience a strong amount of success. Can he add to this with more rankings in 2015 and 2016? More wins will likely=more rankings.

People’s Champ. Johnathan Lone Wolf (@johnathan_wolf)-The NWA/CCW Junior Champion beat Jake Crist to retain the title and then followed that up with a win vs. Justin Rokk at ICW in Marion, IN to get on the ballot after a 2-0 week. The online voting competition was hotly contested this week and in the end, Johnathan Lone Wolf came away with his first People’s Champ award after collecting 62 votes to win the vote by a 12 vote margin. Congratulations to Johnathan Lone Wolf!

Jake Lindo-#2 in the online voting competition with 50 votes

TJ Kemp-#3 in the online voting competition with 46 votes

Drake Evans-#4 in the online voting competition with 28 votes

Johnny Evers-#5 in the online voting competition with 24 votes 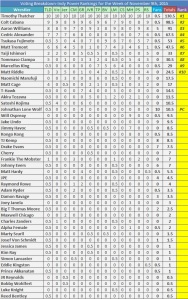 Check out our chronicle of the IWA Mid-South blood feud from 2001 with Corporal Robinson & “Mean” Mitch Page to hear the competitors sit down and talk about the historic battles: http://www.blogtalkradio.com/elitepodcastnetwork/2015/06/05/mitch-page-v-corporal-robinson-the-feud–revisited-hosted-by-phenomenaltld