#2 RPG Vice (Trent ? & Rocky Romero)-Although this team doesn’t have any gold to their credit together yet, they got quite a bit of support from the official voters for the top spot this week. Did quantity beat out quality? Some of the voters would say yes. Beating two solid teams at EVOLVE in TJ Perkins & Timothy Thatcher on 10/17 and Premier Athlete Brand (Anthony Nese & Caleb Konley) on 10/18 meant quite a bit, but didn’t quite have the “wow factor” of a 5-0 week like Strong BJ had. That being said, this team does get their first ranking as most of their time has been spent in New Japan which doesn’t qualify for our rankings. Hopefully we get to see more of them in the future leading to further rankings.

#3 Team IOU (Kerry Awful & Nick Iggy @TeamIOU)-It’s another week and another ranking for the PGP Tag Team Champions. The reinvented duo continue to impress as they defeated The Soul Shooters on 10/16 at PGP in what many considered an independent wrestling dream match. They then defeated James Dylan & Glenn “Chips” Matthews at AWE on 10/18 to go 2-0 for the week. This duo is really on fire right now as we’re heading down the homestretch of 2015. After having such a high ranking in the 2014 Tag Team Top 50…can this team top that ranking in 2015? They’ve got a bit of work to do but there’s no doubt that they’re up for the challenge. Next stop is FIP’s Fallout 6-Man Tournament representing PGP this weekend.

#4 Monster Express (Akira Tozawa & Masato Yoshino)-This Dragon Gate stable continues to have an outstanding 2015 as they rack up wins almost every single week. They get back into the tag team rankings this week after they teamed with T-Hawk on 10/12 at Dragon Gate to defeat Jimmyz (Jimmy K-ness JKS, Jimmy Susumu & Ryo Jimmy Saito) and then defeated Dia.HEARTS (BxB Hulk & Flamita) on 10/13 to go 2-0 for the week. No stable in Dragon Gate has been more dominant than Monster Express and this particular pairing might be the best of the group. With 9 of their last 10 matches being victories, look out for them to continue the strong push towards the top of the Tag Team Top 50.

#5 Polo Promotions (Mark Coffey & Jackie Polo)-After being ranked #4 last week, this team fell slightly but it wasn’t due to lack of trying. First they defeated The 55 (Kid Fite & Sha Samuels) at ICW on 10/17 to retain the ICW Tag Team Titles and then beat the UK Hooligans on 10/18 in a non-title match. They are also the current SWA Tag Team Champions and have won an astounding 18 straight matches. Not an easy fete in an area (the UK) where there are a lot of great tag teams to compete with every single week.

People’s Champs. Detroit vs. Everybody (Cassidy Cain @DatCassidyCain & Jon’tae Keith)-This tag team gets their second People’s Champs award this year and third overall as they cruised to a win in the online voting competition with 128 votes. They defeated Brandon Xavier & Big Moe at WBW on 10/17 to get on the poll and capitalized with yet another victory in the online fan vote. Congrats to this young, hungry team!

Certified Sexy-#2 in the online voting competition with 42 votes

To Infinity and Beyond 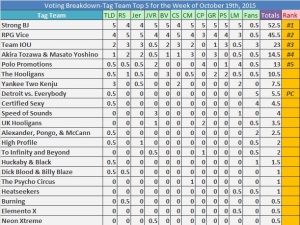 Check out the Tag Team Top 5 Reveal as we will be talking FIP’s Fallout 2015 here: http://www.talkshoe.com/talkshoe/web/talkCast.jsp?masterId=139600&cmd=tc

Check out our chronicle of the IWA Mid-South blood feud from 2001 with Corporal Robinson & “Mean” Mitch Page to hear the competitors sit down and talk about the historic battles: http://www.blogtalkradio.com/elitepodcastnetwork/2015/06/05/mitch-page-v-corporal-robinson-the-feud–revisited-hosted-by-phenomenaltld