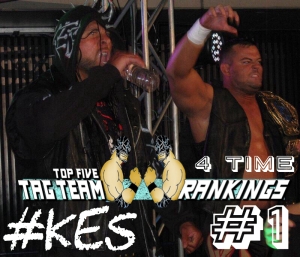 #1 Killer Elite Squad (Lance Archer/Hoyt & Davey Boy Smith, Jr.)-The NWA World Tag Team Champions and GHC Heavyweight Tag Team Champions racked up their 4th #1 ranking this week to move them into contention for the #1 spot in the 2015 Tag Team Top 50. This dominant duo teamed with TAKA Michinoku at NOAH on 9/8 to defeat Brave (Naomichi Marufuji, Mohammed Yone and Taiji Ishimori) then defeated Yoshihiro Takayama & Quiet Storm at NOAH on 9/10, and then teamed with Shelton Benjamin on 9/13 to defeat Naomichi Marufuji, Yoshihiro Takayama and Katsuhiko Nakajima to go 3-0 for the week. Any time a team of this caliber teams to have a week where they go 3-0, it’s very important to what we do, but when they have won 18 straight matches outside of ROH, NJPW and GFW, they’re even more relevant to what we do. Look out for them battling out for the top tag team on the indies in 2015.

#2 Team IOU (Kerry Awful & Nick Iggy @TeamIOU)-As usual, Team IOU was very much helped by the fan voting this week. Despite not being able to secure yet another People’s Champs award, they did come in second in the online voting competition with 77 votes from their fans. It was a great week for one of the best tag teams in the Midwest as the reinvented tandem defeated Jamie Dundee and JD Thunder at SWF on 9/11, then defeated Justin Grandberry and Bob Murdoch on 9/12 at NSCW, and then defeated Lynch Mob (Matt Fortune and Joey Lynch) at AWE on 9/13 to go 3-0 for the week. “A boy and his dog” have become so much more than a comedy tag team in 2015 as they continue their push up the Tag Team Top 50.

#3 Bad Company (Chris Waddell & Jordan Whitaker)-This tag team seemingly came out of nowhere to get their first ranking this week as at WWA on 9/12 they defeated Avispo & Brett Taylor in the first round of the WWA Tag Team Tournament, then defeated Backstreet Noise in the semifinals, and then defeated The System in the final to win the tournament and go 3-0 for the week. Great first week ranking for this team and with them now being (by all accounts) the top team in a company that runs frequently in WWA…they have a great shot at future rankings if they can keep this momentum going. They also picked up 20 votes to come in 5th in the online voting competition this week.

#4 Shingo Takagi & Cyber Kong-This Dragon Gate duo doesn’t often pop up in our rankings as a team. Most times it’s Shingo teaming with Akira Tozawa, etc… but this week was special. They teamed with Kotoka on 9/9 to defeat Monster Express (Masato Yoshino, Akira Tozawa and Shachihoko BOY) at Dragon Gate, then defeated T-Hawk and Big R Shimizu on 9/12, and then defeated Gamma and Takehiro Yamamura on 9/13 to go 3-0 for the week. With the size and power this team possesses, they could be on their way to quite a run in Dragon Gate if they continue to team consistently.

#5 Legion-This is another tag team that seemingly came out of nowhere to get their first ranking this week as they defeated 133t on 9/10 to become #1 contenders to the NWA Midwest Tag Team Titles, then beat Ebony Express on 9/12 to advance to the finals of the CIW Tag Team Title Tournament, and then beat Asian Assassins to become PCW Tag Team Champions on 9/13 to go 3-0 on the week. This team also picked up a respectable 30 votes in the online voting competition to come in 3rd overall in the fan vote. Here’s hoping we get to see more of them this year in our rankings.

People’s Champs. The Fellowship (G.A. West & S.O.G. Ronnie Ribs)-It’s the second victory in the online voting competition for the SPW Tag Team Champions after they defeated The Middlesex Express on 9/11 to retain the titles. With 208 votes collected, this tag team is as popular as any team we’ve seen get on the poll. Can they continue this type of success for the rest of 2015? 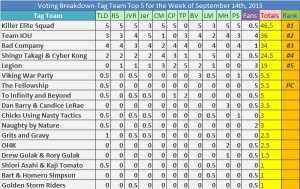 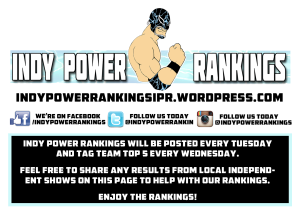 With 131 votes collected Sunday night and Monday, James Anthony was able to win the online voting competition for a TENTH time overall. James Anthony has truly been the model of consistency over the last 2 years as he is always striving to work/wrestle every single weekend whether it’s in singles or in tag team action with his partner, Victor Andrews. He continues to win titles, defend titles, and rack up votes in the online voting competition as he wins week after week (this being his third straight share of the award). It’s only a matter of time until a “big” promotion picks him up as a true asset to the company in every way. Congratulations again to one of our favorite “IPR Guys”!

Here’s where you can follow James Anthony on his quest for that big contract: