#1 Kimber Bombs (Kimber Lee & Cherry Bomb)-This wasn’t even close. The Kimber Bombs dominated the official voters’ ballots this week. After going 3-0 and adding the SHIMMER Tag Team Titles to their trophy case, they were the clear cut #1 this week. Keep in mind they are also the SHINE Tag Team Champions and Kimber Lee holds ½ of the WSU Tag Team Titles, making her a Tag Team Champion in 3 major U.S. female promotions. On 4/11 they defeated The Global Green Gangsters to both retain the SHINE Tag Team Titles and win the SHIMMER Tag Team Titles. The same day they defeated Courtney Rush & Xandra Bale and then the next day they defeated Team Slap Happy to complete their flawless weekend. It’s their first #1 ranking as a team, proving that yes, the females DO deserve to be ranked right along with the men.

#2 Hot and Spicy (Axel Dieter Jr. & Da Mack)-Germany makes another impact in the Indy Power Rankings and the Tag Team Top 5 this week as the EWP Tag Team Champions teamed with Big Daddy Walter at wXw on 4/10 to defeat Karsten Beck & Reich Und Schön (Kevin Roadster & Marius van Beethoven), then defeated Reich und Schön (Marius van Beethoven & Kevin Rohde) on 4/11, and then wrapped up the week when they teamed with Big Daddy Walter to beat Karsten Beck & Reich und Schön (Marius van Beethoven & Kevin Roadster) to go 3-0 for the week. With seven straight victories to their credit, the former wXw Tag Team Champions are on the hunt to get their tag titles back AND to continue this impressive run of success. Perhaps their first #1 ranking will come soon?

#3 The Beast Squad (Monsta Mack & Kyle The Beast)-This is a team who could have grabbed a #1 ranking on almost any other week, but this week was VERY competitive with multiple teams having won 3 matches. The winners of the JCW Tag Team J-Cup get their first ranking after they defeated The Headhunters, Nick Gage & Lucky 13, & EYFBO to win the tournament on 4/10. With 3 victories in one weekend, they’ve got all the momentum on their side going forward. With JCW really starting to make an impact recently, they most definitely will have shots to build on this ranking coming up.

#5 Zero Gravity (Brett Gakiya & CJ Esparza)-This tag team finally got the credit they deserve after they won the DREAMWAVE Tag Team Titles on 4/11 after defeating AC/DC. They also teamed with Louis Lyndon to defeat Christian Faith & The Wet Bandits at AAW on 4/10. With a 2-0 record on the weekend they were able to crack the Tag Team Top 5, but with so many teams with 3-0 weekends, they were unable to get much higher than this spot. That being said, they are active all over the Midwest, so expect to see a lot more of them throughout 2015.

People’s Champs. Tower of Power & His Royal Tenis-The NEW QWA Tag Team Champions EASILY won the online voting competition this week after they defeated Rocko Rumble & Curtus Jaxx and Gingero & Seth Tylors to become the inaugural tag team champions in Australia on 4/11. Congratulations to the promotion as a whole as they have now won TWO online voting competitions proving that QWA may be a force to be reckoned with this year.

Honorable Mention. The N Words (Bryce Benjamin & Acid Jaz)-They are the NEW Freelance Tag Team Champions after defeating The World’s Cutest Tag Team (Joey Ryan & Candice LeRae) on 4/10 in the semifinals of the title tournament, then defeated 4 Star Heroes (Matt Knicks & Chris Castro) the same day to win the vacant titles and go 2-0 for the week. They have won 5 straight matches as a team. 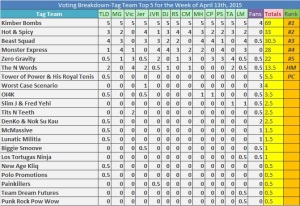 Our Instagram where we SPOIL the Indy Power Rankings/Tag Team Top 5 #1 every Monday and Tuesday Night before you’ll see it anywhere else: @IndyPowerRankings

You can listen to the IPR Live along with a special PWX preview on the return of the Carolina Corner (this week’s IPR Live is a special OPW Hype Central): http://www.blogtalkradio.com/elitepodcastnetwork/

Check out the Indy Power Rankings Reveal on Filling the Void (this is a PGP Hype Central edition of the show with guests, Nick Iggy, Lucy Mendez, & more!): http://www.blogtalkradio.com/fillingthevoidrn/2015/04/14/indy-power-rankings-weekly-reveal-show