Indy Power Rankings for the Week of April 6th, 2015

#1 Santana Garrett (@BrittanyTNA)–The single biggest victory of the entire weekend had to belong to Santana Garrett as the NWA Women’s World Champion (and Ring Warriors Champion) defeated Mia Yim on 4/3 to add the SHINE Title to her massive collection. Not only that, she continued her dominance of independent wrestling as she defeated La Rosa Negra on 4/4 to retain the NWA and SHINE Titles to go 2-0 for the week. She has made an impact in the Indy Power Rankings in 2015 like no female before her and it’s only fitting that she gets her first #1 after one of her biggest victories to date.Congrats to Santana! Cheap plug, go back and listen to her Tag Team Top 5 Reveal Interview here:http://www.blogtalkradio.com/elitepodcastnetwork/2015/03/25/indy-power-rankings-tag-team-top-5-reveal-ft-santana-garrett-brittanytna

#2 Drew Galloway (@GallowaySpeaks)-Last week’s #1 only falls one spot this week, but he continued to do what he does as the EVOLVE, DGUSA Open the Freedom Gate, ICW, DCW and OCW Champion defeated MartyScurll at BCW on 4/4 to retain the Evolve and Dragon Gate titles and then at RPW on 4/5 he defeated Doug Williams to retain the Evolve, Dragon Gate and ICW titles to go 2-0 for the week. He’s one of the very few people on the indies right now (along with Santana Garrett and a handful of others) that have a legitimate shot at catching Akira Tozawa for the #1 spot in the 2015 IPR 100 and with all the titles he has amassed, he’s going to have plenty of shots to build on his impressive 2015.

#3 Brian Cage (@MrGMSI_BCage)-“The F’N Machine” has been “getting his shit in” all year long as he currently holds the IWF and FSP Titles. Over the weekend he defeated El Patron Alberto at AAA on 4/20 and then defeated Biff Busick at PWG on 4/3 to go 2-0 on the week. With a PWG World Title shot in his future, Brian Cage has a great chance to REALLY make an impact on the Indy Power Rankings as he’s still searching for his elusive first #1 ranking after having a great 2013 and struggling a bit last year. Will this monster finally win the PWG World Title and grab his first #1 ranking in the next few months? Time will tell.

#4 People’s Champ. Luxford (@Luxford_13)–What a fantastic weekend for one of Australia’s finest as he went 4-0, winning a big tournament Down Under. That being said, it was also the fan support in the online voting competition that earned him this high ranking. He definitely had a legitimate argument for the #1 spot this week, but it was his fans who again, helped him get this great ranking. This is actually the second time he has won the online voting competition after coming from behind to edge out Nick Iggy for the People’s Champ award this week. 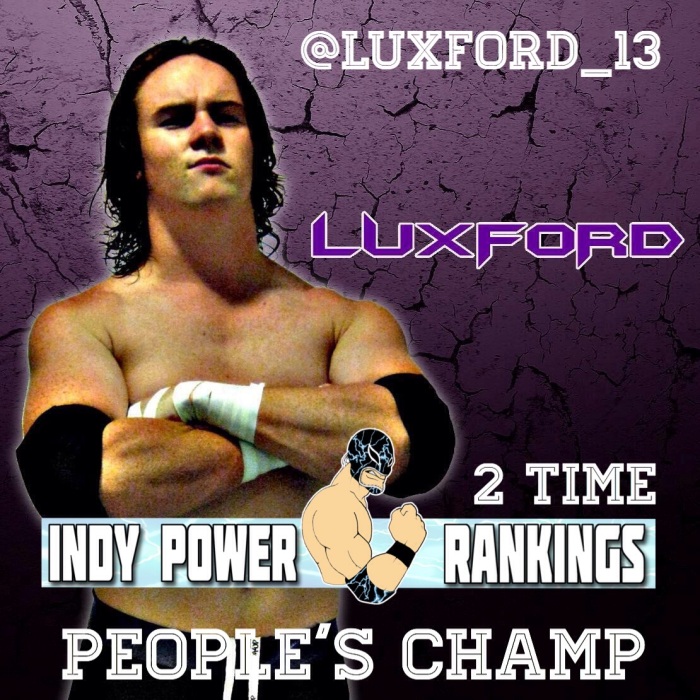 #5 Ron Mathis (@RonMathis13)-The Rockstar Pro (and PDW Heavyweight and Remix Pro Riot) Champion has been getting mentions all year long but has been unable to really break through…that is until this week. On 4/3 he defeated Matt Tremont in a No DQ Match to retain the title and then followed that up with another victory the same night vs. Jake Crist in an impromptu match to retain the title. Pretty impressive stuff from a guy who has been VERY consistent throughout the year and is just now starting to get the true recognition he deserves. One thing’s for sure, he doesn’t plan on giving up thatRockstar Pro Title any time soon, which bodes very well for the rest of his 2015.

#6 Roderick Strong (@RoderickStrong)-The PWG World Title holds a lot of weight among the official voters and you need to look no further than this past weekend to see proof of that fact. Let’s not forget he is also the FIP World Champion. That being said, he picks up a big win and another title defense of the PWG Title vs. Zack Sabre Jr. on 4/3. With 5 wins in his last 6 matches outside of ROH, Roderick Strong is having a phenomenal year and a bit of a career resurgence. “The Messiah of the Backbreaker” has been very impressive this year and we expect that to continue moving forward.

#7 Hideki Suzuki-Very good week for the NEW Wrestle-1 Champion after he defeated KAI for the title on 4/1 and then followed that up by successfully defending his ZERO1 United National Heavyweight Title vs. TakafumiIto 4/5. A 2-0 week (and 4 straight wins) moves him to the #7 ranking this week, which is the highest ranking to come out of Japan this week. With as dominant as some of the various wrestlers have been in Japan in 2015, this is a rarity. That being said, with Suzuki starting to collect titles the way he is, he’s likely going to be making frequent appearances going forward.

#8 Stu Odyssey-A 3-0 weekend earns him his very first ranking this week as it was his shear amount of wins that got him into the Top 10. This UK talent has had an up and down 2015 so far, but weekends like this are the type of thing that he can really start to build on if he can pick up frequent bookings…and wins. Very few of the wrestlers on the Indy Power Rankings poll this week had more than two victories, so Odyssey stood out. Circumstances helped, but he’ll have his chance to really prove himself in future weeks this year.

#9 Cherry (@cherry514)-A 3-0 week gets this strong lady in as she won a 13 Person Catch The Wave 2015 Qualifying Battle Royal on 4/4 and defeated SakuraHirota the same day. On 4/5 she teamed with Leon at Diana 4th Anniversary Show in Korakuen to defeat KahoKobayashi & Yuu Yamagata. Like Odyssey before her, it was her shear number of wins that likely got her into the Top 10 this week. She wrestles frequently as the Union Pro Fly to Everywhere World Champion, so perhaps we’ll see her again in the near future in the rankings.

#10 Cheerleader Melissa (@FutureLegendCF)–One of the very best (female) wrestlers in the world really hasn’t made frequent appearances in the Top 10. For all of her success, she just hasn’t been able to breakthrough with a flawless weekend. After losing in the finals of theChickFight Tournament last week, she bounced back with a victory over Vanessa Kraven at NCW Femme Fatales XVII to slip into the Top 10 this week. With momentum on her side, we may start seeing more frequent appearances from her in the Indy Power Rankings this year.

Our Instagram where we SPOIL the Indy Power Rankings/Tag Team Top 5 #1 every Monday and Tuesday Night before you’ll see it anywhere else:@IndyPowerRankings

You can listen to the IPR Live with new co-host John R. Gray here (this week we have a special discussion regarding Athletic Commission and Unions in wrestling with a TON of HUGE guests!):http://www.blogtalkradio.com/elitepodcastnetwork/2015/04/08/iprlive-athletic-commission-union-discussion-w-john:gray-many-more

Check out the Indy Power Rankings Reveal on Filling the Void (this is a special “Bringin’ the Heat” episode where several IWA Mid-South talents will come on to discuss last week’s cancellation. NO HOLDS BARRED):http://www.blogtalkradio.com/fillingthevoidrn/2015/04/07/indy-power-rankings-weekly-reveal-show