​​​
1. reDRagon (Kyle O’Reilly @ROHOReilly & Bobby Fish @TheBobbyFish)-The ROH World Tag Team Champions can now add another #1 ranking to their collection of accomplishments. That makes FIVE #1 rankings for what many say is “the best team on God’s green.” While Bobby Fish may have been miffed at their #5 ranking a few weeks ago, they more than made up for that this week after two victories at New Japan. First, they beat BUSHI and Mascara Dorada on 10/25 in the NJPW Super Junior Tag Tournament (Round 1) and then they beat Alex Koslov & Gedo in 10/26 in non-tournament action. They have been virtually unbeatable in straight up tag team matches over the last couple of months. Will that trend continue in the NJPW Super Juniors Tag Tourney?

2. Young Bucks (Nick Jackson @NickJacksonYB & Matt Jackson @MattJackson13)-The former tag team champions of multiple promotions look pretty odd without a slew of titles around their waists, but that doesn’t lessen anything they’re doing right now as they’ve continued their success in New Japan over the weekend once again. They beat Jushin Thunder Liger and Tiger Mask #4 on 10/25 in the NJPW Super Junior Tag Tournament (Round 1) and then teamed with Tama Tonga & Yujiro Takahashi to defeat Time Splitters, Jushin Liger, and Mascara Dorada on 10/26 to go 2-0 on the weekend. The ever elusive #1 ranking escaped them yet again this week, but you get the feeling that they’ll be #1 before the end of the year.

3. Sumerian Death Squad (Tommy End @tommyend & Michael Dante @WrestlingDante)-It’s been a few months since we’ve seen this European tag team make an impact and get themselves ranked, but this week was a VERY good week for them. On a lot of other weeks, they’d likely be #1, but this week was filled with heavy competition. The SWE Tag Team Champions defeated The London Riots (James Davis & Rob Lynch) on 10/25 to retain the titles then beat Dangerous Bastards (Dave Mastiff & Danny Garnell) at IPW: UK on 10/26. Another ranking helps them move further up the Tag Team Top 50. Where will they end up when December 29th comes?

4. The Devastation Corporation (Blaster McMassive, Flex Rumblecrunch & Max Smashmaster @DevastationCorp)-The CHIKARA Kings of Trios and former #1’s continued their path of destruction over the weekend as they defeated The Osirian Portal (Amasis & Ophidian) & N_R_G (Hype Rockwell & Race Jaxon) on 10/26 at CHIKARA. They have won 5 straight matches as a 3 man team, which is pretty impressive given the stiff competition they’re usually matched up against. When 2014 comes to an end, will they be the 3-man team with the highest ranking? It’s certainly starting to look that way, but before that, maybe a run at the CHIKARA Campeonatos de Parejas?

5. RockNES Monsters (Johnny Goodtime & Johnny Yuma @YumaBooma)-This West Coast tag team had by far one of the biggest single wins last week when they defeated PPRAY for the CWF Hollywood Heritage Tag Team Titles at BSW in Mexico. Impressive to pick up those prestigious titles, but even more amazing that they did outside the U.S. With some momentum on their side, can they build on this ranking and start to make their move up the Top 5? Had they gotten ANY fan support in the online vote this week, they would have actually been higher than The Devastation Corporation this week as they finished in a tie, but at the end of the day, the fan vote played tie breaker proving that the fan poll DOES play a big part in these rankings.

People’s Champs. Injustice League (James Barton Rigby @JBRWrestler & Troy Stevens @TheTroyStevens)-The PWA CT Tag Team Champions became TWO time People’s Champs after coming from behind to easily win the online voting competition with 62 votes. That marks four times that the titleholders at PWA CT have been #1 and the second time for this young tag team. Back to back!

Our Website (where YOU can participate in the weekly online poll voting): https://indypowerrankingsipr.wordpress.com/
Our Facebook page: http://www.Facebook.com/IndyPowerRankings
Also search “Indy Power Rankings” for our open Facebook group where anyone on the indies can promote their various merchandise, fan pages, and upcoming events
Our Twitter: @IndyPowerRankin
Our Instagram: @IndyPowerRankings
You can listen to the IPR Live here (this week’s guests are Leva Bates & Tessa Blanchard): http://www.blogtalkradio.com/weeklywrestlingpodcast
Check out the Indy Power Rankings Reveal on Filling the Void with special guest, Remi Wilkins: http://www.blogtalkradio.com/fillingthevoidrn/2014/10/28/indy-power-rankings-weekly-reveal
Give Strong Style Wrestling (@StrongStyleWres) and The Hooligans (@BeardedBullys) a follow on Twitter and help them get to 2,000 followers!
​ 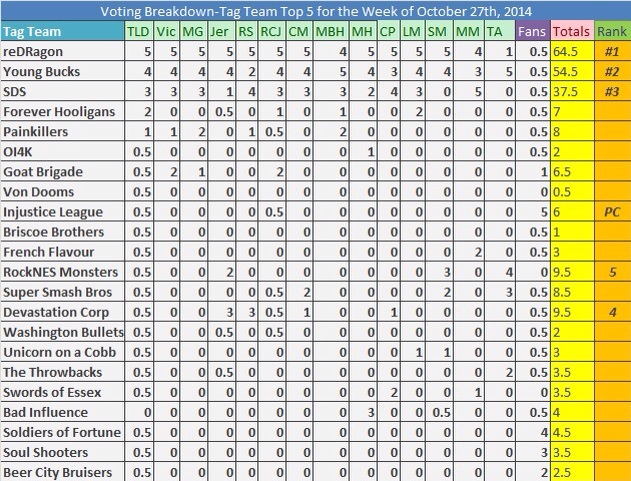