Skip to content
HomeIndy Power Rankings for the Week of September 8th, 2014 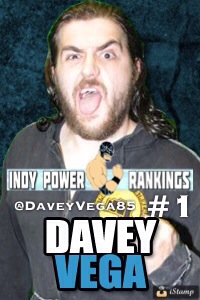 Indy Power Rankings for the Week of September 8th, 2014

1. Davey Vega (@DaveyVega85)-It was a bit of a shocker, but Davey Vega absolutely earned his first-ever #1 ranking this week! His 3 successful defenses of his AIW Intense Title on 9/5 vs. Pete Dunne, on 9/6 vs. Louis Lyndon, and on 9/7 vs. Johnny Gargano, Pete Dunne, and Tyson Dux were enough to grab that #1 spot. It was a career weekend for one of the most underrated talents in the Midwest who is finally starting to get the credit he deserves. We put it out there on the IPR Live last week that this week might produce a new #1 and we weren’t sure who, but those words were prophetic. Congrats to Vega! #2 in the online poll with 40 votes.

2. Jay Briscoe (@jaybriscoe84)-September 6th may go down as one of the most shocking nights in ROH history after Jay Briscoe abruptly ended the ROH World Title reign of Michael Elgin. To say we were stunned would be putting it lightly. As great as that win was for Briscoe, he didn’t quite grab the #1 ranking this week as Davey Vega edged him out with his multiple wins against very strong opponents at AIW over the weekend. With Briscoe’s amazing title win, there’s no doubt that if he can hang on to the gold for a while, another #1 ranking (he was ranked #1 before his injury in 2013) is inevitable. #4 in the online poll with 20 votes.

3. Hype Gotti (@hypegotti)-Hell of a weekend for the man with @IndyPowerRankin on his ring gear! All bias aside, he won a big tournament over the weekend as he defeated Matt Cage, Devin Thomas, and Mark Sterling to win the 3XW King of Des Moines Tournament on 9/5. He followed that up with a 6 Man Tag victory at Magnum Pro on 9/6. It’s been a long time since we had him ranked in the Top 10, but he absolutely dominated the weekend and definitely was in contention for a #1 ranking this week. Let’s see what he can do to build on this momentum going forward.

4. Tim Donst (@tdonst)-It was a long time coming for Donst, but he finally won the AIW Absolute Title on 9/7 when he defeated Josh Alexander for the gold on 9/7. That being said, it wasn’t an easy road to the championship as he went to a 60 Minute Draw vs. Josh Alexander and former Champion Michael Elgin on 9/5 at AIW. Donst has been toiling away at AIW for several months, but he finally broke through with this win and in doing so, he got himself ranked once again the IPR Top 10. #5 in the online poll with 19 votes.

5. Jay Lethal (@TheLethalJay)-After a 3-0 weekend last week, the ROH World TV Champion defended his title vs. Cedric Alexander on 9/6 in a match that many people weren’t sure Lethal would win, but he once again retained the title to run his record to 4-0 over the last 2 weeks. Since joining the House of Truth, he’s been relevant every single week (even if he wasn’t ranked) and now over the last 2 weeks, he’s turning that relevance into tangible rankings. It’s been a pretty memorable 2014 so far for Lethal.

6. Rocksteady Alex Vega (@Rocksteady_1)-Very good weekend for him as he won the Bloor Court Cup for a 2nd straight year after defeating Scotty Turner and then John Greed, Shane Sabre, and Mike Rollins on 9/6. He then followed that up with a big 6 Man Tag Team Match win at SCL on 9/7. This is his first ranking and a solid one at that. It’s pretty impressive to win a one night tournament in independent wrestling, but it’s even more impressive to win that same tournament 2 years in a row. With this ranking, he gets on the IPR radar so we’ll see if he can continue to get mentions and rankings in the upcoming months. Tied for #10 in the online poll.

7. AJ Styles (@AJStylesOrg)-The IWGP Heavyweight Champion had what many called a match of the year candidate on 9/6 vs. Adam Cole and more importantly for our ranking purposes, he beat one of the best wrestlers in the world to add to his quality of competition recently. Styles has been in and out of the Top 10 for the last several months, but has yet to reach #1. He has one of the top titles on the planet, but he’s yet to break through to the top spot. With just a few months left in the year and him currently holding a Top 10 spot in the IPR 100, can he grab a #1 ranking and improve his stock even further? Tied for #7 in the online poll.

8. Robby Phoenix-While the fans didn’t show up to vote for him, the official voters showed him some love this week as the Santino Bros Champion impressed with title defenses vs. Willie Mack on 9/5 and then again vs. Ruben Steele at BPW on 9/6. Many times, the Santino Bros’ talent gets lost in the shuffle due perhaps to their name value being lesser than some of the big names that get ranked every week (he doesn’t have a Twitter that we’re aware of afterall), but Phoenix rose from the ashes this week with those two big victories.

9. People’s Champ. Johnny Smash (@TheChicagoSmash)-If you ever needed proof that the online voting competition matters, look no further than Johnny Smash this week. The UPW American Champion had a solid victory over Dysfunction on 9/6 to retain the title, but what really helped him out this week was the fans as they showed up to support the champ. In doing so, they got him the “People’s Champ” award with 67 votes at #1 which actually pushed him above some of the other talent this week.

10. Joe Black-Hell of a performance on 9/6 for Black as he sneaks into the #10 spot this week after picking up a victory in a #1 contender’s Battle Royal and then followed that up with a HUGE victory as he won the NEW Title to finish off the night as champion. That one night was enough to divide the voters and get enough support for Black to just barely squeak him into the Top 10 this week. We hope to see more of him in the future! Tied for #10 in the online poll.

Our Website (where YOU can participate in the weekly online poll voting): https://indypowerrankingsipr.wordpress.com/
Our Facebook page: http://www.Facebook.com/IndyPowerRankings
Also search “Indy Power Rankings” for our open Facebook group where anyone on the indies can promote their various merchandise, fan pages, and upcoming events
Our Twitter: @IndyPowerRankin
Our Instagram: @IndyPowerRankings
You can listen to the IPR Live here (this week’s guest is “Mean” Mitch Page): http://www.blogtalkradio.com/weeklywrestlingpodcast
Check out our 4th show on Filling the Void with special guest, Brady Lawrence: http://www.blogtalkradio.com/fillingthevoidrn/2014/09/09/indy-power-rankings-weekly-reveal 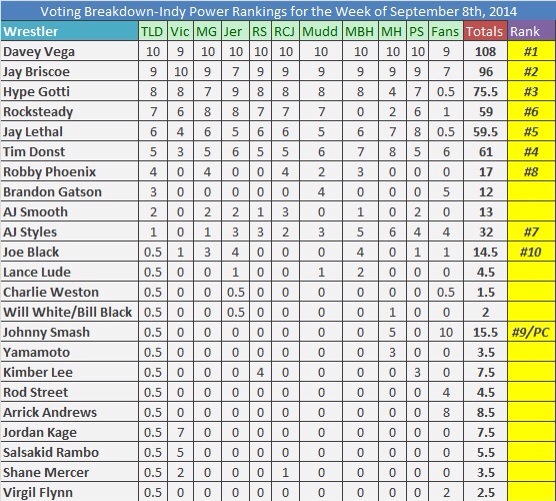