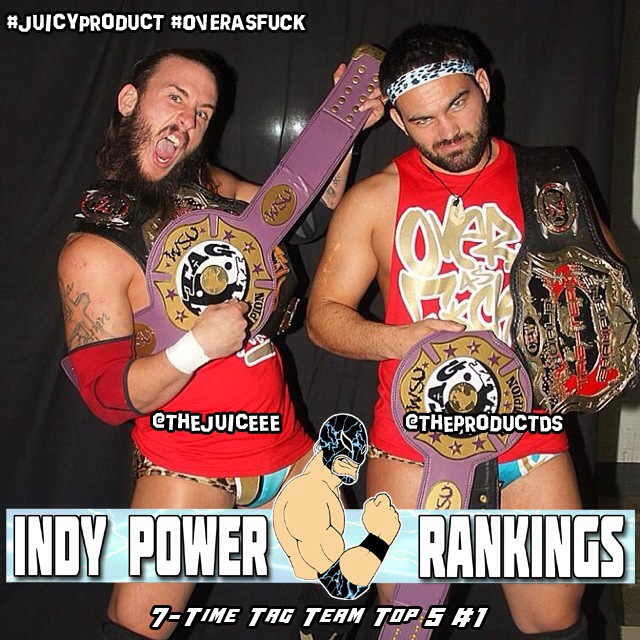 1. Juicy Product (JT Dunn @TheJuiceee & David Starr @TheProductDS)-Just when we thought this tag team couldn’t do anything else to surprise us, they shocked the world again. No one thought they’d be adding more gold to their collection on 7/12, but that’s exactly what they did when they challenged CUNTS (Kimber Lee & Annie Social) to an impromptu WSU Tag Team Title Match. They quickly came out victorious over the former #1 Tag Team and added yet another set of titles to their collection. They now hold the FIP, CZW, NYWC, and WSU Tag Team Titles and that…has earned them their record 7th #1 ranking. They broke their own previous record of 6 #1 rankings from a few weeks ago. Next on their agenda: MORE titles and a date with the Young Bucks at Beyond Wrestling. #2 in the online poll with 72 votes.

2. The Hooligans (Devin & Mason Cutter @BeardedBullys)-You’d be hard pressed to find a team more consistent in 2014 than Devin & Mason Cutter. While Juicy Product and Team IOU have been ranked #1 more times, The Hooligans have been ranked more often. They are the PGP, JCW, and Zero-1 USA Tag Team Champions and last week they defeated Shane Mercer and American Viking at IWA Mid-South on 7/10 and American Viking and Sir Isaac on 7/11 to improve their record to 6-2 over the last 3 weeks. #3 in the online poll with 68 votes.

3. The Hystars (Atlas Hytower @AtlasHytower & Lance Star)-This tag team continues to surprise people as they get their 2nd ranking this week after winning their 4th straight match as a team. The PWAS Detroit Tag Team Champions defeated Breyer Wellington & N8 Mattson of The Threat to retain the titles on 7/11. They are absolutely living proof as to how consistency is key when it comes to these rankings. Maybe they haven’t beaten a team like The Young Bucks or Hooligans, but what they’ve been doing is quietly picking up wins and successfully defending their titles. Could a #1 ranking be the next goal?

4. Team Good Balls (Johnny Primer & GOOD HANK FLANDERS)-The IWE Tag Team Champions have had some close calls, but have yet to really break into the Top 5. They’ve definitely had some weeks where they deserved it, but this week they left little doubt as they went 2-0 on the weekend to retain their titles and continue their reign as champs. On 7/11 they defeated former champions The Leatherheads and then followed that up by defeating Pat Skillz & Christian Cassanova on 7/12. Expect more big things from them if they can continue to retain those titles.

5. The Dudley Boyz (Bubba Ray Dudley @REALBully5150 & D-Von Dudley @TestifyDevon)-This one may be a head scratcher for people who weren’t paying attention. How did a TNA tag team get ranked in the INDY Power Rankings (tag team edition)? Simple. They weren’t wrestling at TNA this week, so what did they do? They won the 2CW Tag Team Titles with a win over Kevin Steen & Jason Axe on 7/13 in a No Holds Barred Match. Hopefully we can get some dream matches with their title run, but time will tell. As long as they’re not active with TNA that week, they’ll have another shot at getting into the Tag Team Top 5.

People’s Champs. London Riots (Rob Lynch @RobLynchRIOTS & James Davis @LondonRiotsJD)-The online voting competition was going at snail’s pace until the last couple of hours when 3 teams all jumped in front of F1rst Generation who led for most of the day. Out of NOWHERE, the IPW: UK British Tag Team Champions won the competition and became People’s Champs for the week. 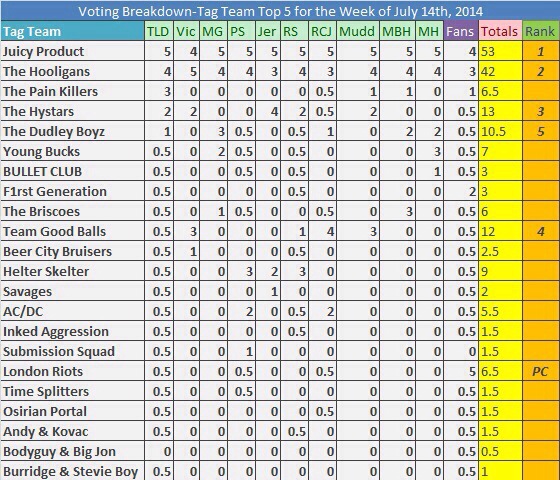