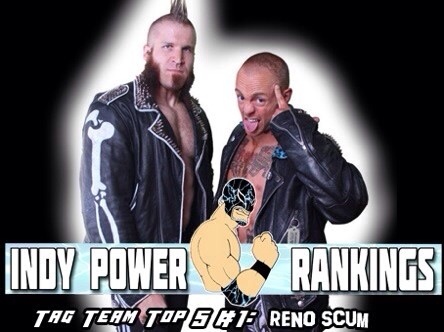 1. Reno Scum (Adam Thornstowe & Luster the Legend)-Their first ranking after several times on the poll after a HUGE victory vs. Bad Influence at the Cauliflower Alley show on 6/2, which added to some of their recent impressive wins such as the one vs. The Young Bucks. Thornstowe himself is a former #1 in the Indy Power Rankings and check our facts, but along with Michael Elgin, he is one of the two people to have been ranked #1 in the Indy Power Rankings Top 10 and the Tag Team Top 5. Look out for this team to continue popping up more and more as the year goes along.

2. London Riots (James Davis & Rob Lynch)-The IPW: UK British Tag Team Champions teamed with Jimmy Havoc, Isaac Zercher and Damon Moser to defeat Eddie Dennis, D&D Security, Chuck Mambo, & Mark Hendry on 6/8. They have won 8 straight matches as a team, but it was perhaps their lack of a straight up tag team match this week that cost them the #1 ranking. Strong arguments were made for them to get the top spot (including their win streak) but ultimately, they ended up at #2.

3. BULLET CLUB (Karl Anderson & Doc Gallows)-The former #1 in the Tag Team Top 5 and the IWGP Tag Team Champions looked to be on the path to another #1 ranking after they started the week off with 4 straight victories. They teamed with Tama Tonga, Bad Luck Fale, & Yujiro Takahashi on 6/3 to defeat Captain New Japan, Hiroshi Tanahashi, Manabu Nakanishi, Tetsuya Naito, & Tomoaki Honma. They then defeated Hiroshi Tanahashi & Tomoaki Honma in a straight up tag team match on 6/4 and then again on 6/5 and one more time on 6/6. They finally lost a 6 man tag to Tanahashi, Naito, and Honma on 6/8 to end their 9 match winning streak and that loss cost them the #1 ranking this week, but considering they are mainstays, there’s no doubt they’ll be back.

4. Team IOU (Kerry Awful & Nick Iggy)-The former NWA Southern Tag Team Champions bounced back this week in a big way after some struggles the last few weeks. They defeated Bama Boys (Josh Crowe & John Wayne Murdoch) and The Jollyville Fuck-Its at CCW in a Gauntlet Match on 6/7. This isn’t their first big win in a Gauntlet Match recently as apparently that’s becoming one of their specialties. A boy and his dog have been one of the most dominant tag teams throughout 2014 and it’s only a matter of time before they get some gold once again. #2 in the online poll with 101 votes.

5. reDRagon (Kyle O’Reilly & Bobby Fish)-It’s been a slow climb for the ROH World Tag Team Champions as they once again barely sneak into the Top 5. This time they defeated the top ROH tag team of all time as they defeated The Briscoes on 6/7 to retain the titles. If they can just turn this into some much needed momentum and a string of wins, there’s no doubt that a #1 ranking (their first as a team) is inevitable.

People’s Champs. The Soul Shooters (Dru Skillz & Apollo Starr)- Defeated The Untamed at Strong Style Wrestling on 6/7 and won the online voting competition with 119 votes at #1 in the poll. 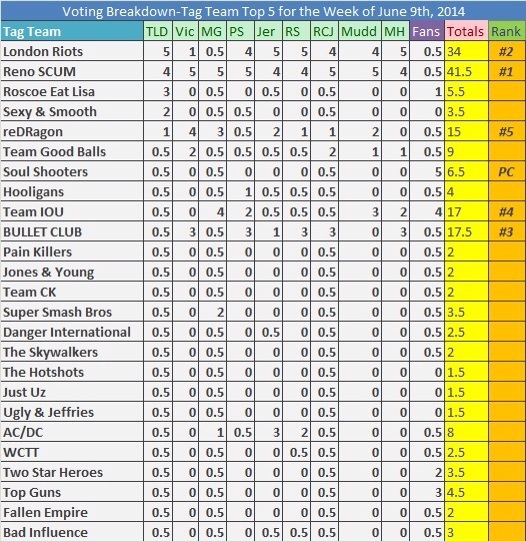